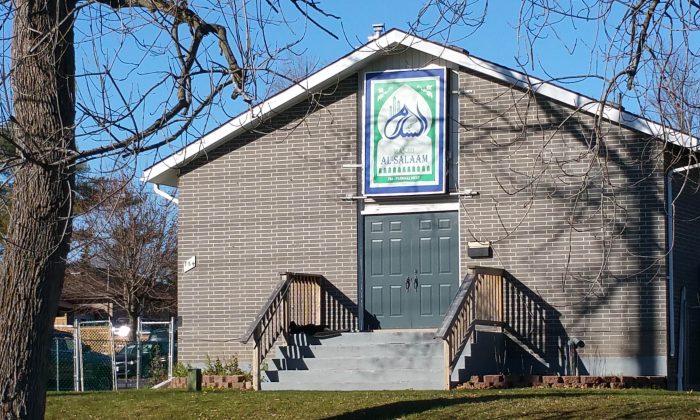 PETERBOROUGH, Canada—”Masjid Al-Salaam,” which translates as the peace mosque, is the only mosque in the small city of Peterborough, Ontario. On the evening of Nov. 14, some 70 of its 200 members were celebrating the birth of a baby. Only half an hour after they cleared out, someone smashed the back window and set the inside ablaze.

He speculated that the arson may be connected to last Friday’s Paris attacks, coming one day later, but he is awaiting further information from the police investigation.

“It has come across our mind that it could be, but we don’t know,” said Abdella.

Police have characterized it as a “hate crime,” but have not identified any suspects.

The only other time the mosque was deliberately damaged since its founding in 1994 was shortly after the 9/11 terrorist attacks. The windows were smashed at that time.

No one was injured, but the fire caused an estimated $80,000 (US$60,000) in damage. A security guard outside the mosque said the windows had expanded in the heat and couldn’t be opened to air the place out.

Though the mosque remained structurally sound, with little damage evident from the outside, the charred insides were not safe to enter without professional  supervision. Flowers addressed to “our neighbors,” were left near the door.

A local man, named Duane Roussell, started a crowdfunding campaign on the website FundRazr. By Tuesday, it had raised about $110,548 from 2,098 donors, surpassing its original $80,000 goal.

Roussell has since been in contact with the KMRA and asked to suspend his fundraiser since it had already exceeded their needs. The mosque thanked the community for its generosity and pledged to use the extra funds for charitable works to be announced in the future.

Touched by the response to his call out, Roussell commented on the crowdfunding page, “I realized that we were all sending a very powerful message to those responsible for this crime, but, more than that, we were sending a strong message of love, responsibility, solidarity, and community.”

One comment on the page, from someone identified as “Peterborough Muslim,” wrote: “As a member of the Peterborough Muslim community I want to thank everyone from the bottom of my heart! We were in tears Saturday night seeing our home in flames and trying to understand the motive of this senseless act. We have had tremendous support from our friends, neighbors, and fellow Canadians. Peace, love, and tolerance will prevail and we will come out of this test as a stronger community.”

We were in tears Saturday night seeing our home in flames and trying to understand the motive.

At a press conference on Nov. 16, Peterborough Mayor Daryl Bennett said, “Let’s make no mistake, this is an incident that is totally, totally out of character for this community.”

Peterborough’s population is about 80,000, and about 93 percent speak English as a first language, according to the 2011 census. Only 5.3 percent reported a native language that isn’t English or French, signalling an immigrant population far below the provincial average. In the province overall, 14.4 percent of people speak a native language other than English or French.

The area’s Member of Parliament Maryam Monsef moved to Peterborough after fleeing the Taliban in Afghanistan in 1996. She described her adopted home as a “warm and generous community” in a statement following the fire.

“We have a proud history as a welcoming and friendly place to live, just as it was when my family arrived here 20 years ago,” she said.

Peterborough’s St. John the Evangelist Anglican Church is also collecting donations on behalf of the mosque. Geoffrey Howson, parish priest at All Saints Peterborough—which has also been damaged by arson in the past—wrote on the KMRA Facebook page: “Our prayers and thoughts are with you. I wrote to you offering our place as a space of refuge, comfort, and support. May God be with you and lift you up during this painful time.”

KMRA stated on its website: “In spite of the incident, we are deeply touched and highly encouraged by the overwhelming support we have received from the Peterborough community at large. We will continue to work with all faith groups and concerned citizens in raising awareness of peace and tolerance.”