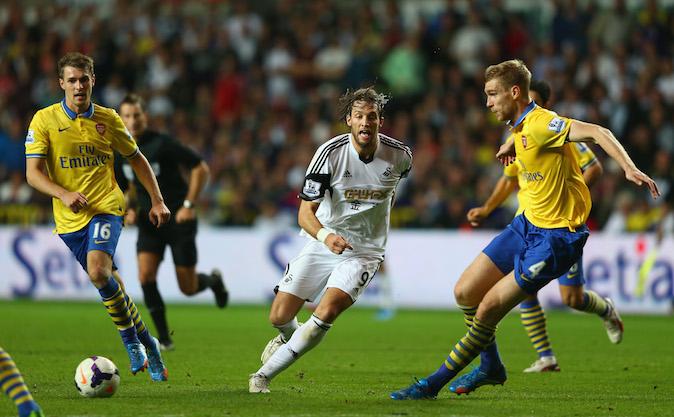 Michu (C) of Swansea City passes as Per Mertesacker (R) of Arsenal closes in during the Barclays Premier League match between Swansea City and Arsenal at the Liberty Stadium on September 28, 2013 in Swansea, Wales. (Photo by Michael Steele/Getty Images)
Soccer

The game will be broadcast on Premier League Extra Time and Directv in the United States.

If anyone is going to drop out of the four-pronged race for the title over the next few weeks, it will most likely be Arsenal.

Chelsea exposed the threadbare nature of Arsenal’s squad by routing its London rival 6-0 on Saturday, a result Arsenal manager Arsene Wenger described as a “nightmare” in his 1,000th match in charge.

His midfield options have been devastated by injuries to Jack Wilshere, Mesut Ozil, Theo Walcott and Aaron Ramsey, and striker Olivier Giroud is starting to struggle with the burden of being the team’s sole attacking focus.

“The players are deeply disappointed as we all are, but now I think let us prepare for the next game,” Wenger said after the loss to Chelsea. “We are in a situation now where after such a disappointment that the next game becomes vital.”