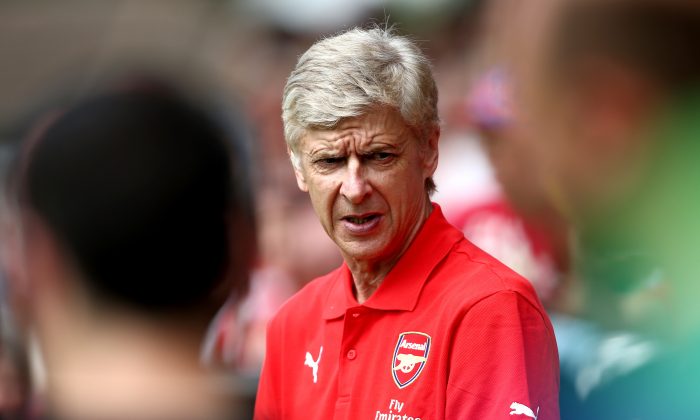 Arsenal manager Arsene Wenger looks on during the pre season friendly match between Borehamwood and Arsenal at Meadow Park on July 19, 2014 in Borehamwood, England. (Photo by Jordan Mansfield/Getty Images)
Soccer

Arsenal and the New York Red Bulls are set to play each other in a club friendly match on Saturday, July 26.

The game will also air on ESPN Brazil in Brazil, as well as SuperSport 3 Africa in Angola, Cameroon, Ghana, Mali, and in most African countries.

Live stream is available on Watch ESPN, Premier Sports, and Arsenal Player (for subscribers only).

Arsenal are 8/5 to win the friendly, while the New York Red Bulls are 19/4 to win, according to OddsChecker.

One of the key highlights of this match is the “face-off” between former Arsenal player and legend Thierry Henry and Arsenal boss Arsene Wenger.

Another player to watch out for in this friendly is new future US soccer national team member Gedion Zelalem.

The 17-year-old Arsenal player is expected to feature in the match.

“[Zelalem] will play on Saturday,” Wenger told reporters on Thursday.

“Gedion has the qualities that I believe are very important to give in the States because the national team I’ve seen [is missing them].

“He’s a creative player and he can create a spark, an opening with his pass, with his vision through the eyes and if he manages to build up his physique and his qualities, he can be a very important player.

“Let’s hope he will do it,” added Wenger.