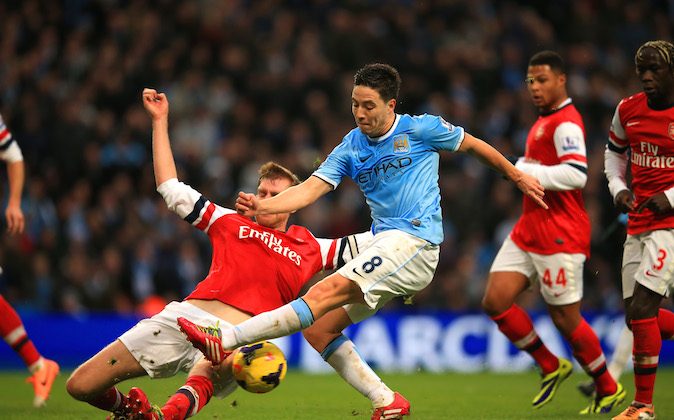 Per Mertesacker of Arsenal tackles Samir Nasri of Manchester City during the Barclays Premier League match between Manchester City and Arsenal at Etihad Stadium on December 14, 2013 in Manchester, England. (Photo by Richard Heathcote/Getty Images)
Soccer

The match will also air on NBCSN in the United States.

Here is an AP article on the match.

From Title Hopefuls to Top-Four Contenders

Arsenal’s form has nosedived to such an extent that the Gunners will have to fight until the final rounds of the season to secure a top-four finish and Champions League football next season.

Having followed up their humiliating 6-0 loss to Chelsea with a disappointing home draw against Swansea, Arsene Wenger’s team is six points behind Chelsea and fifth-place Everton is just six points off with a game in hand. The Merseyside team is at Fulham on Sunday before hosting Arsenal on April 6.

Arsenal manager Arsene Wenger, chasing a first trophy since 2005, acknowledges that his Premier League title hopes are all but gone and is focusing on the FA Cup and a top-four finish.

“Winning the title isn’t our biggest worry at the moment because we have to be realistic,” Wenger said. “Man City look unstoppable and are favorites because they have two games in hand. Everton won, so we have to focus and prepare well for the next game. It will be open until the end, we can still have surprises.”