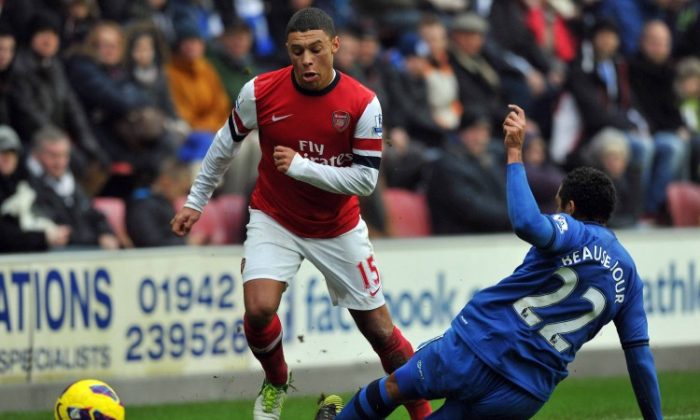 A Mikel Arteta penalty on the hour was enough to seal the 1–0 victory for Arsenal in the lunchtime Barclays Premier League clash at Wigan’s DW Stadium on a rainy Saturday. It was not the most convincing performance by the Gunners, but nonetheless was a third league win on the trot and took them into third place in the table.

The 5–2 victory over Reading on Monday restored some semblance of normality to the Arsenal campaign following an embarrassing Capital One Cup defeat at Bradford. The Gunners started the day two points outside the top four but, amazingly, they sat closer to the relegation zone than to league leaders Manchester United in terms of points differential.

“It’s always difficult to win and get the three points [at Wigan],” Arsenal captain Thomas Vermaelen said in an interview with ESPN after the match.

“We need to be consistent at the moment. I hope we can keep pressure at the top of the table,” Vermaelen said.

England midfielder Jack Wilshere is one of five players to have agreed new long-term contracts with Arsenal, together with Alex Oxlade-Chamberlain, Kieran Gibbs, Aaron Ramsey, and Carl Jenkinson.

“We are delighted that these five young players have all signed new long-term contracts,” Wenger told www.football.co.uk. Theo Walcott has not yet signed a new contract, but was given an opportunity to prove his worth in his new role as a central striker.

“It’s been a good week for all of us,” Oxlade-Chamberlain said referring to the two wins and five signings.

Wigan manager Roberto Martinez said, “You’re going to see this Arsenal side going from strength to strength. They’re still in the Champions League, which is the best competition in the world, and I think this team has got a lot to offer.”

Olivier Giroud and Tomas Rosicky are both ill and did not travel with the Arsenal squad, but Wenger is in the enviable position of having no fresh long-term injuries with which to contend.

Wigan were desperate for points having collected just one of the last 17 available. However, there is some excuse with an injury list that includes virtually the entire first choice defense with the exception of goalkeeper Ali Al-Habsi.

There was some good news for Martinez, though, with star midfielder James McCarthy having recovered from a knock to the ankle, and captain Gary Caldwell fit enough to occupy a place on the bench.

Wigan began with the back three that has become their trademark formation since the latter part of last season. In the absence of so many first choice defenders, McCarthy was asked to play the central role at the back. But he was clearly uncomfortable and was quickly moved into a more familiar midfield holding role as Martinez reverted to a more orthodox back four.

The Latics had to wait until the 24th minute before they could create an opportunity to trouble Wojciech Szczesny in the Arsenal goal, and a good opportunity it was. Unfortunately for the strugglers, Arouna Kone skewed his shot wide from only a few yards out after latching on to a beautiful long ball from Franco Di Santo and racing past Per Mertesacker.

Nonetheless the home side had held their own during the first period and could be reasonably happy with their work thus far.

Arsenal took the initiative at the start of the second half and four minutes in Al-Habsi made a fine stop to foil Walcott from in close. The visitors’ most fruitful avenue of attack in the first half had been down the right flank where Oxlade-Chamberlain appeared to have the beating of Jean Beausejour.

The Chilean continued to look highly vulnerable as a makeshift left back, and Oxlade-Chamberlain always seemed to be able to manufacture that bit of extra space.

It came as no surprise therefore when, on 59 minutes, Beausejour found himself behind Walcott as the England man sped into the box from the right after taking a feed from Santi Cazorla.

Contact was minimal but clumsy and Walcott made the most of it, collapsing in a heap. Referee John Moss pointed to the spot and Mikel Arteta then sent Al-Habsi the wrong way to break the deadlock.

“We showed great spirit; we put out a tremendous effort on the pitch,” Arteta told ESPN.

To their credit, Wigan stuck to their task and began to wear Arsenal down. Two shots in quick succession from Maynor Figueroa and Kone finally gave Szczesny a chance to earn his wages, and a few moments later a well-struck shot from Dave Jones flew past the right-hand post and cannoned off the stanchion supporting the Arsenal net.

The Latics had a decent shout for handball in the Arsenal box turned down in the second minute of stoppage time, but when things are not going your way you just never seem to get the rub of the green.

Wigan are once again languishing in the relegation zone.

Notwithstanding the remarkable escape acts of recent seasons, one feels that Martinez will have his work cut out to avoid the dreaded drop this time around, particularly now that he no longer has Victor Moses in the squad. The lack of a goal scoring threat was painfully evident for Wigan against Arsenal on this day.

One bright spot for the Wigan boss was the outstanding performance of James McCarthy, particularly considering he had been a doubtful starter. The midfielder cost barely a million pounds from Hamilton Academical and has certainly been a bargain buy.

Martinez has said that he expects his protégé to be playing in the Champions League before too long, and one suspects that won’t be with Wigan Athletic.

For Arsenal, despite the many low points this season to date, reaching third place and having positive news off the pitch is as good as they can hope for.