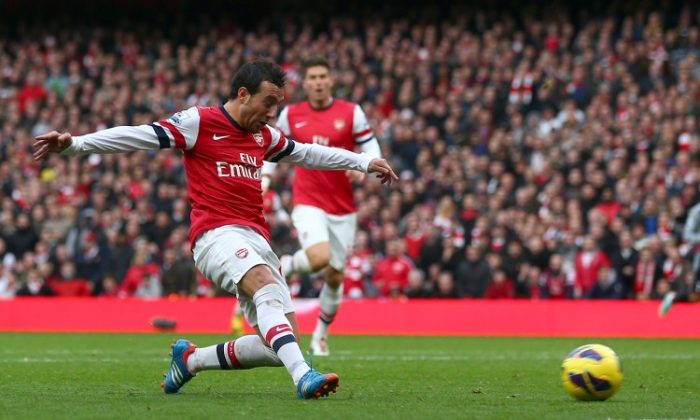 Arsenal demolished Tottenham Hotspur 5–2 in the English Premier League season’s first North London derby in front of 60,111 fans at the Emirates Stadium on Saturday, with goals from a veritable European Union of Per Mertesacker, Lukas Podolski, Olivier Giroud, Santi Cazorla, and Theo Walcott. Spurs striker Emmanuel Adebayor had put the visitors ahead and then got himself sent off for a stupid foul igniting the Arsenal comeback.

It was exactly the same score as the corresponding fixture last season, although the circumstances were quite different. On this occasion the crucial factor was Adebayor’s dismissal, which condemned his teammates to struggle through three-quarters of the match a man short.

“It was crucial for us,” Mertesacker said about the sending off of Adebayor. “We came back very well after his sending off.”

Both teams hadn’t exactly made the starts they wanted to for this season’s campaign. Indeed this had been Arsenal’s worst beginning in the Arsene Wenger era. The two sides both seem prone to giving up leads, so scoring first would not necessarily be an indication of the eventual winner.

Wenger and Andre Villas-Boas both still had key players on the injured list, but rumors that Walcott and Mikel Arteta would be unavailable for Arsenal, and that Jermain Defoe was a doubtful starter for Spurs, proved to be unfounded.

Defoe partnered Adebayor in a two-pronged Tottenham strike force that many fans have been waiting to see since the season began. Central defender Steven Caulker picked up a knock during England’s international friendly in Sweden, so Jan Vertonghen was moved inside with Kyle Naughton coming in at left back.

Jack Wilshere returned to the Arsenal midfield having served his suspension for the red card received against Manchester United.

Both managers opted for a change between the posts with Villas-Boas giving Hugo Lloris the nod over American veteran Brad Friedel; Wojciech Szczesny returned to duty for Arsenal following his injury layoff.

Tottenham started well, as has often been the case in recent weeks, and the home side was on the back foot for the first quarter of an hour. With only nine minutes gone, former Arsenal man William Gallas had the ball in the back of his old club’s net to the usual deafening chorus of boos, but his effort was ruled offside.

Just a minute later Szczesny spread himself well, but could only palm Defoe’s attempt into the path of Adebayor who hustled the ball past the prostrate Pole to silence the home supporters.

However, before Tottenham could capitalize on their period of dominance, Adebayor suffered an inexplicable lack of judgment and launched himself at Cazorla with both feet off the ground and studs aimed at his quarry, who was caught painfully on the ankle and sent flying.

Referee Howard Webb really had no alternative but to produce a red card. The Arsenal supporters were naturally ecstatic, but it was a huge disappointment, not only for the Spurs fans, but all the neutrals as well, as the chances of seeing a genuine contest now appeared slim.

Sure enough, Arsenal quickly gained confidence, began passing the ball well and spreading the play out to the flanks. A mere seven minutes had passed since the sending off before a cross from Walcott from the right found Per Mertesacker on the penalty spot. The German directed a bullet header past Lloris for an excellent equalizer.

There had been 35 goals in the last eight meetings between these two sides and nobody watching doubted that there would be more to come in this one. On 31 minutes, a Wilshere free kick was met solidly by the head of Olivier Giroud but saved brilliantly by Lloris.

Giroud was thwarted a second time by his countryman nine minutes later, but it looked only a matter of time before the Gunners hit the net again. Podolski gained possession in the Tottenham area, turned and shot with Gallas seemingly covering him well. Podolski’s deflected shot wrong-footed Lloris and Arsenal was finally in the lead 2–1.

However, the real killer blow came in first half stoppage time as the industrious Cazorla charged into the left side of the area and crossed along the turf to where Giroud was waiting on the edge of the 6-yard box to put it away while covered by a couple of Spurs defenders.

Villas-Boas changed tactics for the second half in an attempt to keep the score respectable. Michael Dawson and Clint Dempsey came on for Naughton and Kyle Walker, which meant there would now be three center backs, with Gareth Bale and Aaron Lennon playing as attacking wing backs.

Tottenham certainly appeared to be in better shape with the new formation, but it all came to grief 30 seconds short of the hour. Walcott put Podolski into a good position on the left side allowing him to measure a flat cross to the far post where Cazorla was steaming in at a rate of knots and not about to make a mistake, with only the keeper to beat.

With Arsenal now up 4–1, the game now appeared to be over as any kind of serious contest but Spurs, to their credit, refused to give up.

As we all know, the White Hart Lane club does possess one player who is an exceptional talent. On 71 minutes, Bale showed his class by creating an opportunity for himself, which he finished with a lovely strike from outside the Arsenal area with his weaker right foot.

Shortly afterwards, he could have really brought his team back into contention, but his shot from a tight angle went wide of the far post. A more precise pass to Defoe in the center might have brought Spurs back to within a goal, but it is hard to be critical of the Welsh international who played his heart out in a forlorn cause. He has also scored from such tight angles before, as Inter Milan will remember all too well.

With Tottenham’s defenders dead on their feet, the fresh legs of fit again substitute Alex Oxlade-Chamberlain was simply too much for them to cope with. The young speedster could probably have grabbed a goal for himself as the Spurs defense retreated in front of him, but he unselfishly elected to pass to Walcott in the center-forward position and his England colleague did the rest.

“We were ruthless going forward today,” said Walcott after the match in an interview with ESPN.

Interviewed by Fox Sports before the game, Arsene Wenger stressed, “We have to make ground up.” The three points allowed the Gunners to leapfrog Tottenham into sixth place in the table, but they are well out of touch with the leaders.

Mertesacker was optimistic after the strong Arsenal performance. “We had a great game today,” he said. He called the upcoming Champions League match a “very vital game.”

Arsenal will hope to clinch qualification for the knockout phase of the European Champions League with a win over French champions Montpellier in midweek, while Spurs can look forward to a challenging Europa League clash away to Lazio.