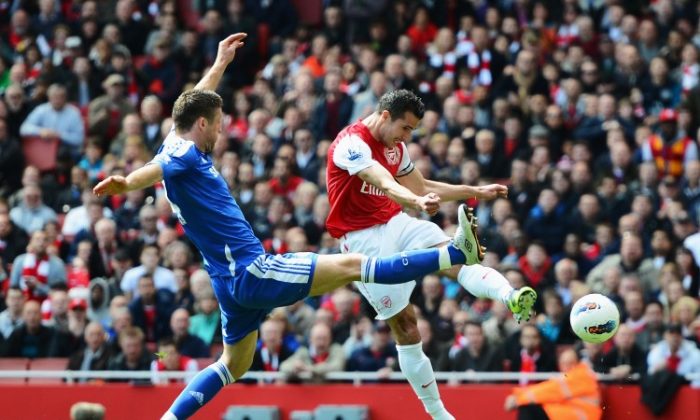 Neither Arsenal nor Chelsea were able to produce a goal in what was a fairly mundane London derby at the Emirates Stadium Saturday afternoon.

The point lifted Arsenal temporarily six clear of Newcastle United and Tottenham Hotspur in the battle for third place in the Barclays Premier League and automatic qualification for next season’s UEFA Champions League.

However, both Newcastle and Spurs can reduce the gap to three points when Saturday’s fixtures are completed, and both will still have a game in hand on the Gunners.

Interviewed by Fox Sports after the match, Chelsea defender and Man-of-the-Match Gary Cahill said it was “a good result, a good point for us,” but felt that the game had remained scoreless because “the final ball from both teams lacked a little bit today.”

It was a case of poor finishing by both clubs, most notably Arsenal.

In fact Cahill, John Terry, and goalkeeper Petr Cech were the only survivors from the team that achieved that unlikely 1–0 win over Barcelona last Wednesday. With Tuesday’s second leg in Spain looming large, Roberto Di Matteo elected to rest seven players.

Branislav Ivanovic was suspended and David Luis remained unavailable through injury. It is testimony to the depth of Chelsea’s squad that most of the replacements have been first team regulars at one time or another.

With Mikel Arteta now out for the remainder of the season, Aaron Ramsey regained his position in the Arsenal midfield, and the fans were delighted to see Alex Oxlade-Chamberlain given a start.

Arsenal the Most Likely

Arsenal quickly took the initiative against this revamped Chelsea outfit and could easily have gone in at half time a couple of goals to the good. The afternoon’s first shot in anger came after five minutes when Tomas Rosicky had a go from a couple of yards outside the Chelsea penalty area. Rosicky made good contact but it was a routine save for Cech.

The Gunners came much closer on 14 minutes when the right boot of Theo Walcott curled in an inviting free kick from out on the left. Robin van Persie could only deflect the ball onto the outside of the post rather than into the goal.

Three minutes before half-time it was van Persie’s turn to take a free kick—again from just outside the Chelsea area, but this time more central—and his effort found an unmarked Laurent Koscielny whose looping header beat Cech but not the crossbar.

Then two minutes later, van Persie had another decent opportunity from the left hand corner of the six-yard box but fired his shot straight at Cech.

By contrast, Chelsea was restricted to a few half chances with nothing really clear-cut at all. Arsenal had generally been flat, with the exception of their play late in the first half.

The second half of this match was somewhat less than inspiring and did not really come to life until the final 10 minutes. At the 81-minute mark, van Persie went down in the area as Gary Cahill leaned into him. The Arsenal supporters screamed for a penalty but referee Mike Dean was not interested. It would certainly have been harsh if he had given it.

The Arsenal skipper and top scorer is now officially in a goal slump having netted only once in the last seven games. With 86 minutes on the clock, yet another chance fell to van Persie that a few weeks ago you feel sure he would have buried, but again Cech made the save without too much difficulty.

Two minutes later Daniel Sturridge could have snatched another unlikely winner for the Blues, but Koscielny was the sharper and got a foot in before the Chelsea man could pull the trigger. As it was, neither side was able to break the deadlock.

With this game coming between the two blockbusters against Barcelona, it would probably have been unfair to expect too much from Chelsea on this occasion.

Arsenal was inevitably less content with the point, but will take some satisfaction from the fact that the club is on course to finish ahead of their London rivals in the league for the first time in seven years.

“It was a very unfair result but it is a result,” said Arsenal manager Arsene Wenger as reported by Arsenal.com. “At the end of the game we had the chances and they had zero. I cannot remember them having one chance.”

Terry and Cahill were heroic in the center of defense for the visitors and will need to be so for the third time in a week if Chelsea is to survive their trip to the Nou Camp on Tuesday.