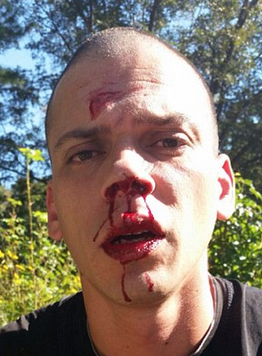 Arron Lewis is the prime suspect in the Beverly Carter case in Arkansas.

Authorities say Carter planned to show a house Thursday night in Scott, a rural area east of Little Rock, but she never returned from the appointment. She was found dead on Tuesday.

Police say Lewis was arrested at a Little Rock apartment complex after someone spotted him and called 911.

The Pulaski County Sheriff’s Office announced the arrest. Lt. Carl Minden says authorities aren’t releasing details on how investigators identified Lewis as a suspect. He says Lewis is on parole for previous convictions in Arkansas.

Lewis told a KARK reporter on Tuesday, while being transported to his initial court appearance, whether he killed Carter.

“No,” he replied, adding that he hadn’t seen her for two days.

Lewis pled not guilty to capital murder, kidnapping, and four counts of possession of a firearm.

Lewis said that a man named “Trevor” was behind the murder, but Pulaski County Sheriff’s Office spokesman Lt. Carl Minden told KARK that “Trevor” isn’t a suspect in the cast.

Lewis also said that he was sorry to the victim’s family.

Following the discovery of the body, Beverly’s family released a statement, saying “There is now a hole in our hearts that will never be filled. Mr Lewis robbed us of an amazing wife, loving mother and grandmother.”