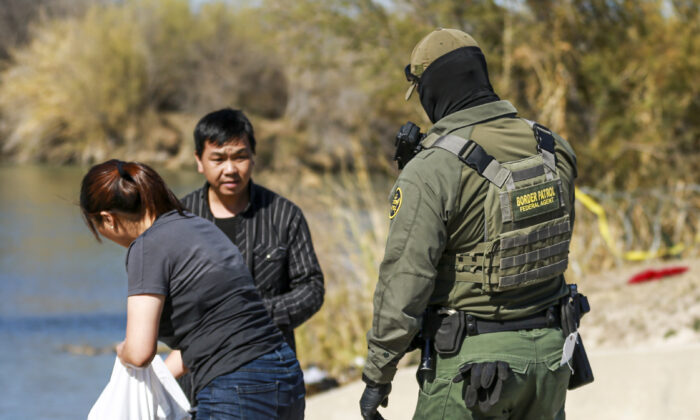 A Border Patrol agent apprehends a Chinese couple that just waded across the Rio Grande from Mexico into Eagle Pass, Texas, on Jan. 25, 2022. (Charlotte Cuthbertson/The Epoch Times)
US News

The border crisis shows no signs of slowing down under President Joe Biden, with arrests of illegal immigrants in February spiking 63 percent from February 2021.

The newest figure is the highest number of arrests in the month of February since 2000.

Since Biden took office in January 2021, he and top administration officials have relaxed or ended various Trump era immigration policies, including curbing the use of expulsion powers and cutting deportations.

Immigration arrests started spiking the month after Biden was sworn in and have remained at unprecedented levels.

The number of arrests in Biden’s first year set a record. That record will likely be broken in his second year unless drastic changes are made, some experts say.

RJ Hauman, head of government relations and communications at the Federation for American Immigration Reform, said the February figures “confirm what we already knew: President Biden and Secretary Mayorkas aren’t securing our border; they are trying to build upon a historic crisis and make mass migration the new normal.”

“In doing so, they are not only undermining our sovereignty, but compromising the health, safety, and security of the American people,” he added.

Rep. Pete Stauber (R-Minn.) wrote on Twitter, “Numbers don’t lie: this was the worst February on record in over 2 decades!”

The White House didn’t respond to a request for comment. A query sent to the Department of Homeland Security (DHS) requesting a comment from Alejandro Mayorkas, the department’s head, wasn’t returned.

Customs and Border Protection, an agency that sits inside DHS, claimed the numbers are overstated.

“The large number of expulsions during the pandemic has contributed to a higher-than-usual number of migrants making multiple border crossing attempts, which means that total encounters somewhat overstate the number of unique individuals arriving at the border,” the agency said in a statement.

February “registered a slight uptick in the number of encounters along the Southwest border, with most individuals arriving from Mexico and the Northern Triangle, and the majority of noncitizens expelled under Title 42,” Chris Magnus, the agency’s commissioner, added.

Title 42 is a power imposed during the pandemic that allows agents to quickly expel many illegal immigrants because of fears they are carrying the CCP (Chinese Communist Party) virus, which causes COVID-19.

The Biden administration early on stopped using Title 42 against illegal immigrant children who arrive without a responsible adult. The administration on March 12 formally ended expulsions of such children, asserting the pandemic doesn’t present as big of a public health threat as it once did.

The number of encounters with unaccompanied children rose 37 percent in February over the prior month, hitting an average of 520 a day. Encounters with family units decreased but the number of arrests of single adults increased.

Approximately 66 percent of single adults encountered were expelled under Title 42, along with about 30 percent of people who arrived at the border as part of a family.