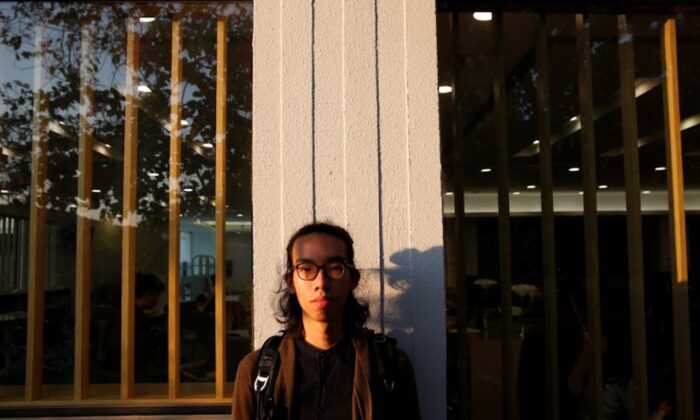 Derek Tai poses for photo at the campus of Chinese University of Hong Kong in Hong Kong, China, on Jan. 14, 2020. (Tyrone Siu/Reuters)
By Reuters

HONG KONG—Derek Tai was arrested outside Hong Kong’s Legislative Council building last June, early in the city’s pro-democracy protests, which have seen millions join demonstrations over the past seven months.

Tai, a soft-spoken 21-year-old philosophy major, was one of the first protesters to be arrested. Five months later, he was charged with unlawful assembly, a crime that carries a sentence of up to three years in jail. In past cases, defendants have been sentenced to eight months.

“I didn’t really think they would charge me,” he said. Tai had planned to study in Germany this year, but like many of his peers, he now faces a potential prison term and an unpredictable future in Hong Kong.

More than 7,000 protesters have been arrested amid seven months of unrest over a since-withdrawn extradition bill. Of those, 1,092 have been charged, Hong Kong police chief Chris Tang told district councillors recently.

Just 12 people have been sentenced, Tang said, with the longest sentence, 14 months, handed down to a protester who had a petrol bomb.

For protesters like Tai, the scale of mass arrests and charges, longer-than-normal delays for hearings, and bail conditions that could land them in jail if they are arrested again have forced them to put their lives on hold—and discouraged them from returning to the streets.

The arrested demonstrators, 40 percent of whom are secondary school and university students, face a slew of charges, including rioting, arson, and possession of weapons. Protesters convicted of rioting, one of the most serious charges, can face up to 10 years in prison.

Tai has not told his mother he was charged. She lives in mainland China and could not understand why her son was arrested at a protest.

“She was disappointed … she thinks I’m capable of doing more things than getting arrested, and our relatives in the mainland think I’m a rioter,” he said.

Whenever he feels depressed, Tai tries to remember his favorite Chinese philosophers.

“It really gives me strength,” he said. “Especially when they emphasize that I have the ability to see what’s right and wrong,” he said.

Tai said he felt it was important to publicly discuss his case and use his full name so arrested protesters were not reduced to a statistic.

Police have conducted dozens of mass arrests at protests and rallies—often with scant evidence, critics say—leaving the task of building winnable cases to the Hong Kong Department of Justice.

A New Year’s Day march this year ended with the arrest of more than 400 people after police ordered the dispersal of an officially sanctioned event, leading to street clashes.

Protesters and rights groups say mass arrests are a powerful deterrent for demonstrators. People who are free on bail may fear attending even legally approved rallies because if they are arrested again, they risk being kept in custody until sentencing.

Under Hong Kong law, arrestees can only be held for 48 hours without charges. Most protesters have been granted bail, but supporters say courts are setting tighter bail conditions, including restrictions on travel outside the city.

Robert Godden, the co-founder of Rights Exposure, a local human rights consultancy, was arrested with a colleague in November during the siege of Hong Kong Polytechnic University, where they were acting as human rights observers.

He was questioned and detained for 16 hours before being granted bail.

So far, Godden has not been charged. The Hong Kong police said it does not comment on individual cases.

“There is an uncertainty that weighs on you; you don’t know whether they’ll contact our lawyers tomorrow and say we’ve decided to charge you with X, Y, or Z,” he said. “It’s a low hum in the background that sometimes gets louder.”

Godden said the specter of possible charges has a chilling effect on human rights and political activists.

Police arrested three volunteers for the Civil Rights Observer, a human rights group, as they monitored the Jan. 1 march.

Later in January, Hong Kong denied entry to the global head of Human Rights Watch, who had traveled to the city to release the group’s annual world report. Hong Kong’s immigration department said it would not comment on individual cases.

The flood of arrestees has strained the courts, lawyers and advocates say.

Vannie Lau, a solicitor defending 10 arrested protesters, including Tai, said many lawyers are already volunteering for 25 cases, the maximum number for which the government will subsidize fees for defendants who can’t afford representation.

Lau said it was not uncommon for court hearings to stretch long past normal hours, recounting a hearing for 96 people in a rioting case that lasted from 4:30 to 10:30 p.m.

“It just shows that even the judiciary can’t handle such a large amount of defendants,” Lau said.

The city’s most senior judge, Chief Justice Geoffrey Ma, acknowledged the huge volume of pending cases at an event with Hong Kong and mainland Chinese lawyers, noting that most cases were not ready for trial.

He said a task force had been set up to study how the courts can expedite matters.

The justice department did not respond to a Reuters request for comment.

Activists have come up with their own ways to track the glut of pending trials. A Telegram channel called “You are not alone HK” offers real-time summaries and updates of protest-related court hearings. The channel, set up last August, already has more than 50,000 subscribers.

The group’s 14 volunteers line up for public seats in court hearings and provide a transcription service for families, supporters and lawyers. A volunteer who helps run the group said it has covered more than 100 hearings involving 1,000 defendants.

In December, police arrested members of Spark Alliance, an organization that raised money to cover protesters’ legal fees, on charges of money laundering and froze HK$70 million ($9 million) in donations.

Tai’s legal fees are covered by the 612 Humanitarian Relief Fund.

Ann, Tai’s girlfriend of a year, recalled the anxiety she felt when she learned of his arrest.

“It felt like time had stopped for 40 hours. I didn’t cry or feel anything,” when he was in detention, the 20-year-old university student said. “When I saw him again, I felt relieved. But I also knew it was just the beginning.”

Ann, who declined to give her last name because she fears repercussions for speaking out, said 10 other friends had been arrested at protests. It has become routine for her to contact their families and find lawyers.

“It’s so terrible that I got used to it and I’ve started to feel numb already,” she said.

Tai’s next court hearing is scheduled for March. Not knowing whether he will spend months or years in jail, Tai has told Ann to be ready to move on.

“I don’t think the responsibility is on her to wait for me,” he said.

Classes at Chinese University of Hong Kong provided a distraction for Ann before they were suspended because of the protests. She finally broke down in the two weeks leading up to Tai’s first court appearance on Nov. 8.

“Before everything happened, I didn’t really cherish his existence in my life,” she said. “I was so used to the fact that he would always be there for me.”

Defendants and their families say they are determined to keep protesting and are willing to serve months or years in prison for the cause.

“I know that someone has to carry this responsibility because a thousand of us have already been charged,” Tai said. “Some of us have to do it, and it just happens to be me.”

By Jessie Pang and Mari Saito