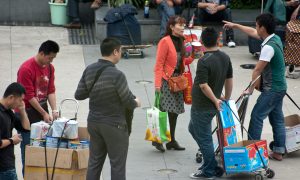 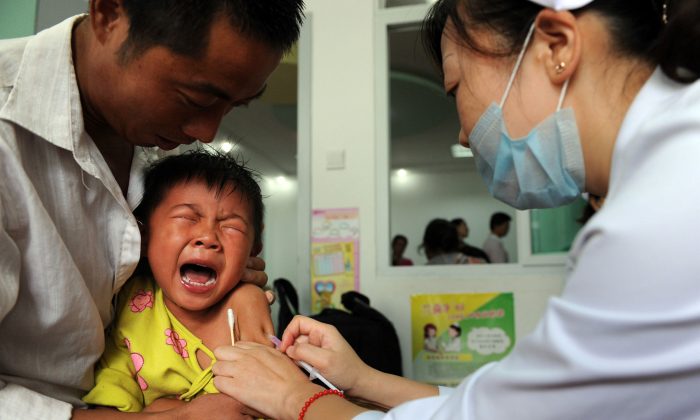 A Chinese boy screams out in pain as he gets inoculated against measles in eastern China’s Anhui province on Sept. 11, 2010. Police stopped an illegal business selling tainted vaccines in Shandong Province. (STR/AFP/Getty Images)
Chinese Regime

Arrest of Pharmacist in China Highlights Risk of Tainted Vaccines

Tainted milk powder in China caught the world’s attention when it was exposed in 2008, and stories quickly emerged of Chinese shoppers hitting supermarkets around the world trying to secure the safety of their children. Now in China, there is a specter of an even greater danger for infants: tainted vaccinations.

Police in Shandong, eastern China, recently arrested Ms. Pang, a pharmacist, and her daughter, accusing them of running a vast ring of out-of-date vaccinations. The bad vaccines were circulated in over 20 provinces, with proceeds of over 570 million yuan (about 86.6 million) involved, according to the state mouthpiece Xinhua. Police found in Ms. Pang’s warehouse vaccines left out in the open air, without any refrigeration—both necessary for safe vaccine storage.

In China, vaccines for diseases like Hepatitis B and Polio are provided by the state. Immunization against other diseases, however—including chickenpox, pneumococcal, diphtheria, tetanus and whooping cough—requires people to pay from their own pockets.

Those peddling a cheaper product, like Ms. Pang, thus have an opportunity to get their foot in the door.

Ms. Pang is not a stranger to law enforcement. She was sentenced to three years in jail, suspended for five years, back in 2009, also for “running an illegal vaccine business.”

Besides selling her substandard vaccines to illegal medical operators, Ms. Pang even sold them wholesale to officials working in provincial disease prevention departments around China.

Chinese media have not announced and prosecutions of the officials who bought the tainted supply off her.

In September 2015, in a separate case not believed to be connected to Ms. Pang, stories of children getting sick and suffering high fever after being vaccinated were reported in Henan Province. Over 350 children had been vaccinated with products that were six months past their expiration date, it was later determined. Two children eventually died, according to state-run Yangcheng Evening News.

Even dogs in China appear to have fallen victim to bad vaccines, according to unconfirmed reports on Chinese social media.

On Sina Weibo, China’s Twitter-like service, a netizen from Zhejiang Province using the name “Qiu Qiu mm9” said in a post on Nov. 17 that her dog died one week after getting a vaccine shot at a pet store. The owner denied responsibility and abused her on the phone when she called to complain, the post said.

On Baidu Tieba, a popular social media website, two other Internet users shared their own stories detailing the deaths of their dogs soon after they received vaccinations. One was from Shenzhen, in the south, and the other in Wuhan, central China.