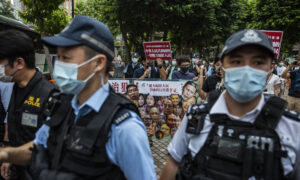 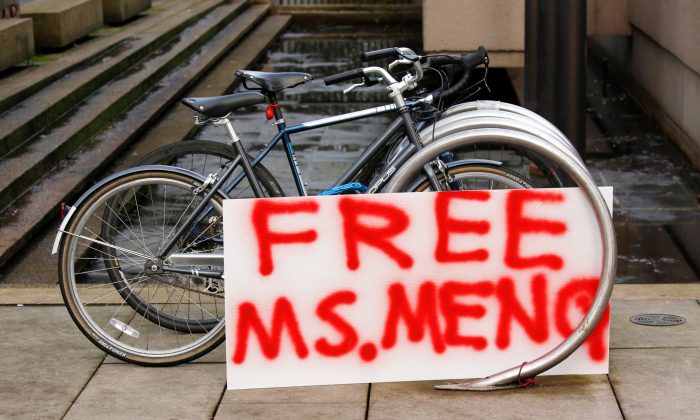 A sign in support of Huawei CFO Meng Wanzhou is displayed outside of the B.C. Supreme Court bail hearing of Meng, who is being held on an extradition warrant in Vancouver, British Columbia, Canada December 10, 2018. REUTERS/David Ryder
Chinese Regime

The arrest of Huawei chief financial officer Meng Wanzhou in Vancouver has drawn attention to recently passed Chinese legislation that requires all Chinese people and individuals at home and abroad to aid the communist regime in its global espionage efforts.

China’s National Security Law was passed in June 2017 and amended this April.

Even without any direct relationship with the Ministry of State Security (MSS), which is the Chinese regime’s main intelligence and security agency, the National Security Law gives all Chinese citizens and entities the responsibility to supply intelligence information if requested.

Although there’s no official report or solid evidence to show a relation between Meng Wanzhou and the MSS, many scholars and commentators suspect that Meng is a member of the MSS. Huawei itself is linked to both the Chinese military via its founder Ren Zhengfei, and the MSS via its chairwoman since 1999, Sun Yafang.

The fourth item of the Law requires the intelligence department to take the principle of the “mass line,” which was advocated by former Chinese Communist Party (CCP) leader Mao Zedong as a means of mobilizing the people to carry out political objectives.

In the seventh item, the Law requests that “any organization and citizen should support, assist, and cooperate with national intelligence work, and keep secret any such work known to them.”

The tenth item says that the intelligence department can “collect intelligence information inside and outside of China using necessary methods, measures, and channels.”

The fourteenth item of the Law says: “The state intelligence department has the right to ask any (Chinese) government, organization, and citizen to supply the necessary support, assistance, and cooperation.”

To encourage Chinese to support intelligence work, the Law says: “the state will take the necessary steps to protect and rescue the citizen and his or her direct relatives when he or she is facing threats to personal safety related to intelligence work.”

“What are the necessary methods, measures, and channels?” asked Wang Tiancheng, the director of the Institute of China’s Democratic Transformation.

Speaking to The Epoch Times, he said that the National Intelligence Law is replete with ambiguous wording and provides the MSS with ample opportunity to violate laws both in China and in other countries.

“Surveillance, monitoring, illegal detention, arresting people without warranty, and other illegal activities inside and outside of China, all these can be done under the name of state security,” Chinese human right lawyer Teng Biao told The Epoch Times on Dec. 11.

Teng said the Chinese regime’s intelligence work has nothing to do with national security, but is to protect the CCP regime.

Qin Yongpei, another Chinese human right lawyer, told The Epoch Times that the Party asks all citizens to act as spies to protect its interests. “The CCP’s interests bear no relation to national welfare. CCP is protecting its own rule,” he said.

The CCP has set up an intelligence network inside China that covers every school, neighborhood, and so on, while also expanding this network abroad, Qin said.

Qin noted that Beijing’s high-profile efforts to pressure the Canadian government to free Meng Wanzhou are likely a play to inspire confidence in other Chinese, but in actuality the Party only wants Meng freed because as a top executive in Huawei, she knows too much.

The regime “has no other choice because Meng Wanzhou knows too many major secrets,” Qin said. “She is special. “For a normal businessman [involved with intelligence work], the CCP won’t show any concern.”