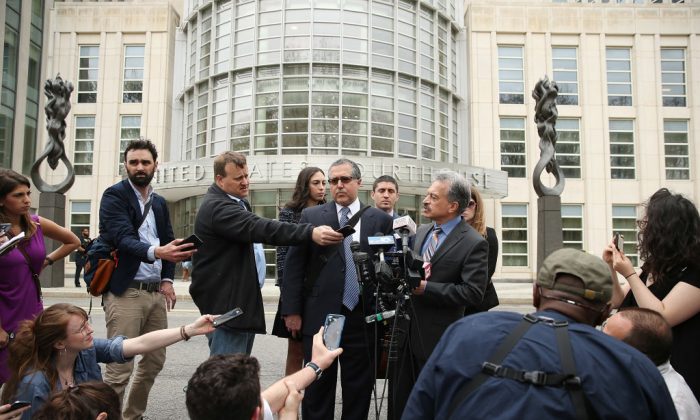 Lawyers Marc Agnifilo and Paul DerOhannesian speak to the media after a bail hearing for actress Allison Mack and NXIVM founder Keith Raniere, in relation to sex trafficking charges, in New York on May 4. (Jemal Countess/Getty Images)
Crime and Incidents

NEW YORK—Dozens of children fell ill from a mysterious disease at a retreat hosted in New York by the notorious NXIVM cult, according to a report by the New York State Department of Health.

The 16-page report centers on Brandon Porter, NXIVM’s doctor, and accuses him of failing to report the outbreak of the disease. The document also accuses Porter of conducting a barrage of shocking human experiments, such as showing scenes of gruesome murder and decapitation to test subjects without their consent.

About “50 to 60 children” were present at the event attended by nearly 400 people—including Porter himself—at the Silver Bay YMCA recruitment office in New York, back in August 2016. During the conference, “many of the attendees and most of the children became ill with an undetermined infectious disease.” Attendees allegedly suffered from “flu-like symptoms, vomiting, and diarrhea.”

Porter, 44, had full knowledge that the illness at the conference was a communicable disease, but he failed to report the incident, the New York state Office of Professional Medical Conduct (OPMC) alleges in the document. Porter is also accused of failing to isolate individuals with the disease to an appropriate environment.

The New York-based NXIVM, which operates under the guise of a self-help company that runs “executive success programs,” is a secret society that previously made headlines when leader Keith Raniere and former “Smallville” actress Allison Mack were charged for sex trafficking and conspiracy to commit forced labor. The pair recently made their first appearance together at a pretrial hearing in a Brooklyn federal court on May 4.

A former NXIVM spokesperson suggests that Raniere may have experimented with the food served at the event, using the students as test subjects.

Prior to the indictment, NXIVM’s enterprise was largely shrouded in secrecy. Members were recruited on the condition that they gave up compromising material about themselves. Once the members were inside, NXIVM regularly demanded more materials as “collateral” to ensure that they kept secret the society’s inner workings.

Former spokesperson for NXIVM Frank Parlato, writing about the New York retreat on his blog, The Frank Report, said that none of the “higher-ups” of the society, including Raniere, got sick at the event—only the “students” did.

Parlato, who has been publishing information on the society’s inner workings since 2008 and who has been credited with assisting in Raniere’s arrest, wrote in the August 2017 post that when the students left the event, the leaders told them not to tell anyone what had happened there and, if asked, to say their symptoms were from the flu and not “food poisoning.”

He suggests that Raniere may have experimented with the food served at the event, using the students as test subjects “to learn some important lesson about human reaction.”

“It might have been a drug experimentation on Keith’s part,” Parlato wrote.

“Dr. Brandon Porter was there. Maybe somebody should ask him.”

Porter was charged for conducting illegal and highly perverse experiments for a “fright study” on human subjects. The OPMC accused Porter of showing subjects “an actual video of the horrific and brutal murders and dismemberment of four women by machetes.”

Between 2012 and 2017, the doctor also allegedly showed subjects other violent clips without their consent, including “a male African-American being viciously stomped by a Nazi; a conscious male being forced to eat a portion of his own brain matter; and a graphic gang rape.”

Porter has also been charged for conducting illegal and highly perverse experiments for a ‘fright study’ conducted on human subjects.

Porter is charged with moral unfitness, gross negligence, and gross incompetence. The OMPC has set a June 27 hearing for Porter to determine whether his medical license should be revoked. If those charges are proven, he could be facing criminal charges by the New York State Attorney General.

The Epoch Times reached out to the New York State Health Department for confirmation of the allegations, but a spokesperson said they were “prohibited” from “commenting on prior or pending Office of Professional Medical Conduct investigations beyond what is publicly available.”

The accusations against Porter come after both cult leader Raniere and Mack pleaded not guilty to charges that they persuaded women to join a secret society within the group, resulting in the women’s enslavement as sex slaves. According to an October 2017 New York Times feature, some of the women were branded with a symbol that prosecutors said contained Raniere’s initials.

More arrests are expected to occur in the coming weeks amid an ongoing investigation into sex trafficking perpetrated by the supposed self-help group. Assistant U.S. Attorney Moira Penza told a judge at the federal Brooklyn court that the government plans to file a revised indictment that would name even more defendants, according to The Associated Press.