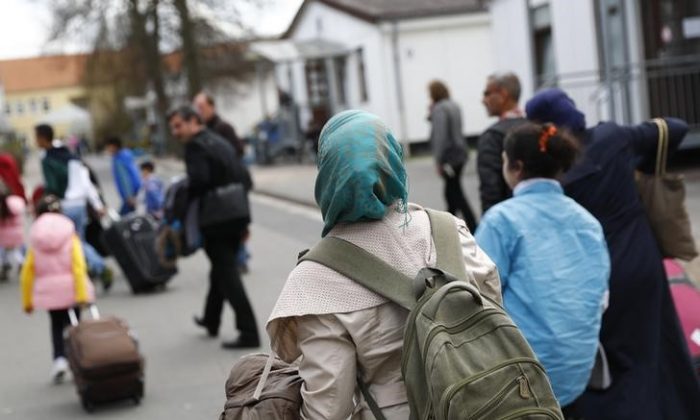 Around 270,000 Syrians Have Right to Bring Families to Germany: Report

BERLIN—Around 270,000 Syrians in Germany have the right to bring in their family members, a newspaper said on Wednesday—a statistic that could fuel the debate about migration less than six months before a national election.

Mass-selling tabloid Bild cited a government paper as showing a total of 431,376Syrians applied for asylum in Germany in 2015 and 2016 and said that of those 267,500 would be entitled to family reunifications in Germany.

That could play into the hands of the anti-immigrant Alternative for Germany (AfD) party, which has lost support in recent months as the refugee issue recedes from the headlines ahead of a Sept. 24 election.

Senior AfD member Alexander Gauland condemned the figures, saying it was “absolute madness” to allow so many people to bring their families to Germany:“Billions and billions of tax money are being swallowed and the social state is being steered toward breakdown while our eyes are wide open.”

Neither the Federal Office for Migration and Refugees (BAMF) nor the Interior Ministry immediately responded to requests for comment on the report.

In 2016, the government decided to suspend family re-unifications for two years for migrants who get “subsidiary protection”—granted to people who are not considered as being persecuted individually but in whose home country there is war, torture or other inhumane treatment.

Syrians are the biggest group of asylum applicants in Germany. They are increasingly being granted subsidiary protection rather than refugee status and that means they are only granted the right of residence for a year, although this can be extended.

More than a million migrants flocked to Germany in 2015 and 2016 but arrivals havedropped significantly. The AfD, which has made immigration one of its key rallying points, is currently on between 7 and 11 percent in opinion polls, above the 5 percent threshold to enter parliament.

“If we govern the country sensibly and don’t attack each other personally in the election campaign, we can push the AfD under 5 percent,” Seehofer said.

However, while his party is behind Merkel in the election campaign he said it was sticking to its demand for a cap on the number of migrants coming here—a proposal which the chancellor has rejected.

In 2016, some 280,000 migrants arrived in Germany, a sharp drop compared with 890,000 the previous year. Bild said while there were no numbers for 2017 yet, the federal police had already caught more than 20,000 illegal migrants on the borders in the first three months of this year.

Separately, the German cabinet on Wednesday approved a draft law that would prevent child marriages conducted abroad from being recognized in Germany. It says marriages should automatically be void if at least one of the partners was younger than 16 at the time they wed.