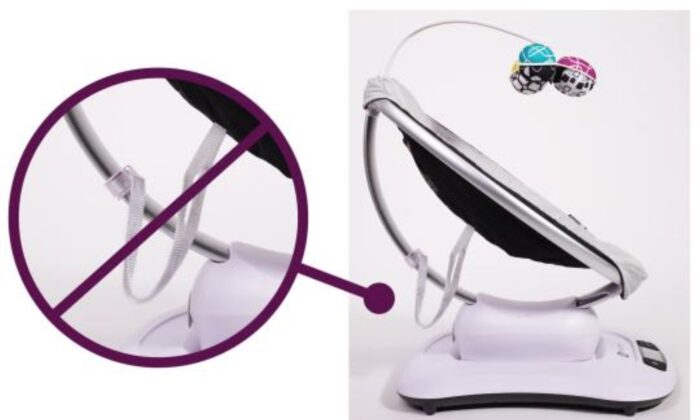 Around 2 Million Infant Swings, 220,000 Rockers Recalled After Death of 10-Month-Old

Roughly 2 million infant swings and 220,000 rockers made by Thorley’s 4moms are being recalled after reports of entanglement incidents involving infants and the death of a 10-month-old.

Pittsburgh, Pennsylvania-headquartered Thorley Industries and the U.S. Consumer Product Safety Commission (CPSC) announced the recall in a notice on Monday.

The MamaRoo model that uses a five-point harness is not included in this recall.

The RockaRoo baby rocker being recalled has a front-to-back gliding motion, according to CPSC. The base has an analog knob and power button to control the range of motion of the rocker. As with the MamaRoo swings, the model number 4M-012 is located on the bottom of the unit.

An additional 60,000 MamaRoo swings and 10,000 RockaRoo rockers were sold in Canada, the agency and company said.

“When the swing or rocker is not in use, their restraint straps can hang below the seat and non-occupant crawling infants can become entangled in the straps, posing entanglement and strangulation hazards,” they wrote.

Thorley’s 4moms said it has received two reports of “entanglement incidents” in which infants had become caught in the strap under the unoccupied infant swing after they crawled under the seat.

No incidents involving the RockaRoo have been reported, they said.

MamaRoo swings and RockaRoo rockers are sold at Buy Buy Baby and Target stores across the United States, as well as online at 4moms.com and Amazon.

Individuals who have purchased the recalled swings or rockers and who have infants who are able to crawl are being asked to immediately stop using them and place them in an area out of reach from infants.

Consumers are also being urged to contact 4moms immediately to register for a free strap fastener which will stop the straps from extending under the swing when it is not in use.

“We are deeply saddened by the two incidents that occurred when babies crawled under the seat of unoccupied MamaRoo swings,” Gary Waters, CEO of 4moms, said in a statement to CBS News. “The free strap fastener kit we have designed is an easy-to-install solution that we believe will prevent any other incidents from happening,” he added.

The latest recall follows a similar one in June in which CPSC warned that Fisher-Price’s rockers are unfit for sleeping and have been associated with at least 13 infant deaths between 2009 and 2021.