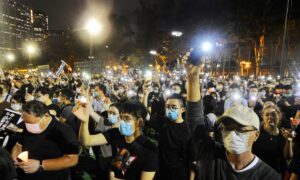 Army Steps in as Severe Storms Cause Chaos in New Zealand

The largest city on New Zealand’s south island has declared a state of emergency amid a severe storm which has already seen hundreds of homes evacuated across the Pacific island nation, highways cut and soldiers called in to help provide emergency services.

The New Zealand Defense Force mobilized additional troops overnight on Friday, bringing its total deployment to at least a dozen trucks and 140 personnel to provide emergency services and help rescue those trapped by rising flood waters.

Christchurch declared a state of emergency after the Heathcote River burst its banks and flooded southern parts of the city on Saturday morning, becoming the fourth area to do so after a severe weather event which has lashed the south island over the past 24 hours, causing widespread flooding.

Local media reports that about 1,500 people in settlements further north were told to leave their homes as water levels rose overnight, while more than 100 homes were evacuated outside of Dunedin, the south island’s second largest city.

Emergency services are now focused on the Taieri River near Dunedin, after predictions it would rise to near-record levels on Saturday.

In addition to Christchurch and Dunedin, states of emergency are ongoing in Timaru and Otago.

“My thoughts are with those affected by the weather events in the South Island. Please follow official advice and take care of each other,” the prime minister said on Twitter.

The country’s weather bureau said rivers in affected areas remained at very high levels on Saturday morning, after some areas were hit with more than 200 millimeters (7.8 inches) of rain in 24 hours.

It predicted that rain should gradually ease throughout the day, however it said cold temperatures and blizzard-like conditions could affect those at higher levels.

In good news for the rugby-mad nation, however, a Super Rugby quarter-final between Dunedin and Christchurch on Saturday night was scheduled to go ahead after fears the storm could have disrupted the match.