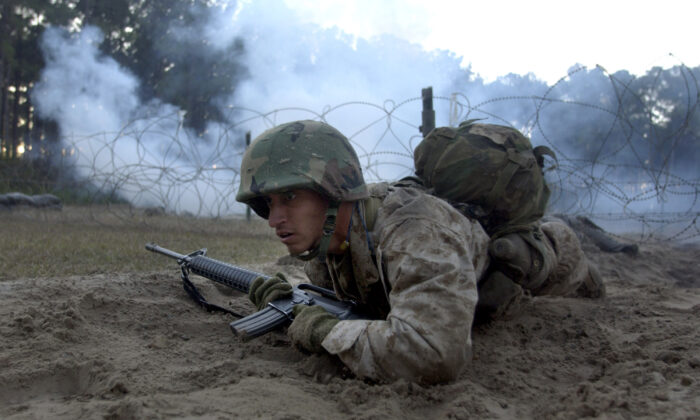 The training exercise is known as “Robin Sage” after Col. Jerry Michael Sage, an Office of Strategic Services (OSS) operative who was captured by the Nazis and attempted to escape more than 15 times before succeeding. The exercise has been conducted since 1974.

It serves as a “final test for soldiers in the Special Forces Qualification Course and has been the litmus test for Soldiers striving to earn the Green Beret for more than 50 years” officials said on Facebook.

This year, the “unconventional warfare exercise” will be held between Jan. 22 and Feb. 4 with students from the U.S. Army John F. Kennedy Special Warfare Center and School at Fort Bragg.

It will see soldiers placed in an “environment of political instability characterized by armed conflict” known as “Pineland” where they will need to analyze and solve problems to meet the challenges of this “real-world” training.

In an effort to be as realistic as possible, the exercise will include the sounds of gunfire and flares.

However, “controls are in place to ensure there is no risk to persons or property. Residents with concerns should contact local law enforcement officials, who will immediately contact exercise control officials,” Fort Bragg officials said.

The Army has also written formal notifications regarding the training exercise to the chiefs of law enforcement agencies in the affected counties and will be conducting a follow-up visit with a unit representative.

“All civilian and non-student military participants are also briefed on procedures to follow if there is contact with law enforcement officials,” officials said.

Students participating in the training will “only wear civilian clothes if the situation warrants, as determined by the instructors,” otherwise, they will be wearing a “distinctive brown armband” and the training areas and vehicles that are used in the exercise will also be clearly labeled.

It will also take part in Chesterfield, Dillon, and Marlboro counties in South Carolina but the exact times, specific locations, and other exercise specifics are not provided.