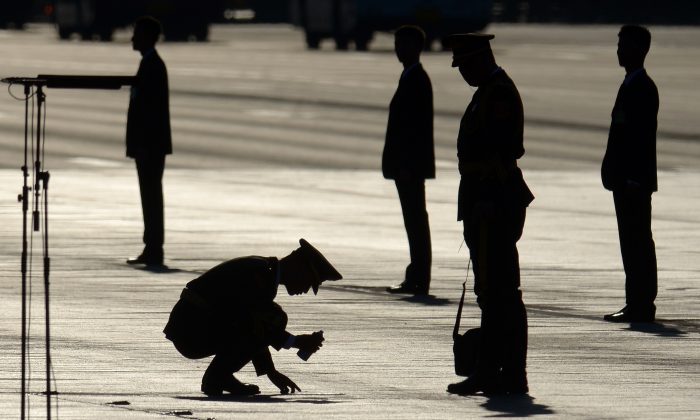 A Chinese soldier marks a spot on the ground before a military parade at Tiananmen Square in Beijing on Sept. 3, 2015. On Dec. 29, the 27th Army Group in Beijing, a unit notorious for partaking in the Tiananmen Square massacre on June 4, 1989, was disbanded, reorganized, and relocated to Shandong, a neighboring province. An army-wide reorganization is currently underway. (Wang Zhao/AFP/Getty Images)
China

The 27th Army Group of the People’s Liberation Army has been around since the Chinese Communist Party seized China. It was one of the first Chinese units to fight United Nations forces in the Korean War. More prominently, the Beijing-based unit became infamous for taking part in the bloody massacre on Tiananmen Square.

A quarter century after Tiananmen, however, the 27th Army Group is no more. On Dec. 29, the unit was reorganized as a division, and has been relocated to a tank regiment barracks in a suburb of Taiyuan, a city in the eastern Chinese province of Shandong, according to Ming Pao, a reputable Hong Kong daily broadsheet.

The disintegration of the 27th Army Group is in line with a massive military restructuring and modernization project initiated by Party leader Xi Jinping. All 18 army groups, which are each about 45,000 to 60,000-strong, are slated to undergo some form of reorganization.

Xi first alluded to the sweeping military reforms when he announced that 300,000 troops would be cut from the People’s Liberation Army during a grandiose military parade in September. He then laid out a broad plan for the reforms, which are scheduled for completion in 2020, at the end of November. High-ranking military officers could either get on board with Xi’s reforms or get out of the military, the People’s Liberation Army’s newspaper warned in early December.

The 27th Army Group is no stranger to restructuring. Elements of the unit were part of the 8th Route Army, the Communist Party’s main fighting force in the Second World War. In 1946, the unit was reformed as the 9th Column of the Eastern China Field Army, and only became the 27th Army Group in February 1949.

The unit would be best remembered not for valor on the battlefield—it was involved in several key skirmishes against Generalissimo Chiang Kai-shek’s Republican forces before the communist takeover of China, and later saw action in the Korean War—but for committing atrocities in Beijing’s Tiananmen Square on June 4, 1989.

According to numerous eyewitnesses accounts, soldiers and armored troop carriers from the 27th Army Group were the most active in shooting students and residents of Beijing that fateful day.

Declassified diplomatic documents tell a similar story to eyewitnesses, and report troop infighting. One cable from the U.S. Embassy in Beijing to Washington said “soldiers from other units” were “run over” by the 27th Army Group’s armored combat vehicles and tanks.  Units stationed in the vicinity then started “entering Beijing … without authorization and are intent upon attacking the 27th Army,” according to a morning brief for the Secretary of State on June 6.