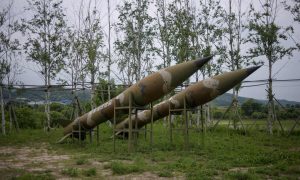 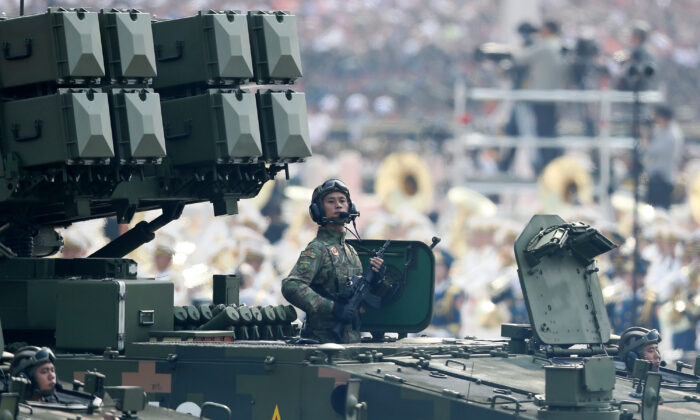 BEIJING, CHINA - OCTOBER 01: A soldier of the People's Liberation Army stands on a tank during a parade to celebrate the 70th Anniversary of the founding of the People's Republic of China in 1949, at Tiananmen Square on October 1, 2019 in Beijing, China. (Photo by Andrea Verdelli/Getty Images)
Chinese Regime

Every 10 years, China holds a major military parade in Beijing to mark the anniversary of the Communist Party’s takeover of China on Oct. 1, 1949, declared by Mao Zedong, the first leader of the Chinese Communist Party (CCP) dictatorship. These parades give the CCP-led People’s Liberation Army (PLA) an opportunity to display new weapons, usually developed over the previous decade, to intimidate adversaries near and far, in addition to the Chinese people.

This 70th anniversary military parade is intended to intimidate two major targets: the distant democracy of the United States and the nearby democracy on Taiwan. New airborne and land force weapons will be reviewed in part two of this series. But the main new PLA weapons revealed in this parade are missiles.

DF-41: Analysts have been able to view images of the developing China Aerospace Science and Technology Corporation (CASC) Dong Feng (East Wind) DF-41 intercontinental ballistic missile (ICBM) since 2007, but its appearance in the 70th anniversary parade (seen below) is a strong indicator that it is now in service with the PLA Rocket Force (PLARF).

It is now the largest solid-fueled ICBM in PLARF service and its transporter-erector-launcher (TEL) is capable of off-road launches, giving it greater tactical flexibility.

The 14,000 to 15,000 kilometer (km) range DF-41 has an estimated payload capability of 10 small nuclear warheads. Other estimates note it may carry only six warheads with decoy rounds. A railroad-based version is in development. One informal Chinese source indicates that two brigades of DF-41s are deployed or building up.

DF-31AG: The latest version of the mobile and solid-fueled CASC DF-31 ICBM, first observed in 1999, which became known as the DF-31AG, and first seen outside its factory in 2013.

Main improvements for the 11,000+ km range DF-31AG include an off-road capable TEL and its reported use of a “hot launch” tube which does not require as exacting launch preparation. This potentially gives the DF-31AG (seen below) an ability to perform a more rapid launch from off-road areas exploiting natural concealment, after emerging from underground or concealed basing.

According to the 2019 U.S. Department of Defense China Military Power Report, there are four Type 094s in operation with two being completed for a near-term total of six. As each 094 carries 12 JL-2 SLBMs, that adds up to an eventual arsenal of 72 JL-2s.

On June 2, 2019, the PLA tested the next-generation JL-3, expected to have a 11,000+ km range and multiple warheads. It may also be armed with hypersonic glide vehicle (HGV) warheads and is expected to arm the 3rd generation Type 096 SSBN that may emerge in the early 2020s.

At a May 29, 2019 symposium at the Washington-based Hudson Institute, Defense Intelligence Agency Director Lt. General Robert Ashley stated, “Over the next decade China is likely to at least double the size of its nuclear stockpile.” He also stated that current Chinese warhead numbers are in the “low couple hundred,” indicating possible growth to 400-500 warheads by 2029.

However, this growth could be much faster. While it did not appear in the parade, the PLA is testing a reported 10-warhead armed version of the liquid-fueled DF-5 ICBM, called the DF-5C. Informal Chinese sources indicate the size of the PLARF’s ICBM brigade may now be 18 missiles, meaning that one DF-41 rail-based and DF-5C brigade could add up to 540 more warheads.

Two brigades each of these new ICBMs could vault PLARF warhead numbers to over 1,000, on their way to parity with the 1,550 deployed warheads allowed for the United States and Russia under the 2010 New START Treaty.

Also on display were three new theater-range missiles intended to threaten Taiwan and to deter Washington from assisting Taiwan in the event that China decides to attack.

DF-17: First tested in November 2017, the China Aerospace Science and Industry Corporation (CASIC) DF-17 (seen below) is the world’s first theater-range missile to be armed with a new hypersonic glide vehicle (HGV) warhead. With its prominent control surfaces, the DF-17’s HGV is apparently capable of significant maneuverability at very high speeds, in order to defeat missiles defenses.

In the PLARF, the 1,800 to 2,500 km range DF-17 may join brigades armed with CASIC’s 1,000 km range DF-16 ballistic missile, in order to perform simultaneous high and low altitude missile strikes.

DF-100: While images of its transporter have been seen since 2013, useful data regarding the CASIC DF-100 (below) has not emerged until very recently. The parade announcer confirmed informal Chinese sources that had previously noted it is a “hypersonic” speed cruise missile. These sources note it may have a 2,000+ km range.

Vague imagery of the DF-100 missile that emerged on Sept. 25 indicates it may be powered by a ramjet engine. Unconfirmed Chinese sources also claim it may be able to penetrate 11 meters of concrete.

Strikes by the hypersonic speed and high-altitude DF-100 could be coordinated with strikes by the 1,500 km range CASIC DF-10 subsonic speed, low altitude cruise missile, or other ballistic missiles. Chinese sources indicate that an air-launched version of the DF-20 may also be under development.

YJ-18/YJ-18A: Based on the Russian Novator 3M-54E unique two-stage subsonic/supersonic speed anti-ship cruise missile, CASIC’s ship-launched YJ-18 and possibly the submarine-launched YJ-18A (below) began to emerge in 2013, though clear images did not appear until 2017.

The YJ-18’s subsonic speed first stage has a range of about 500 km. When about 50 km from its target, it launches a second stage rocket flying at Mach 2.5 to better defeat a ship’s close-in missile defenses.

Within a decade, China could unveil even larger ICBMs and more high speed and maneuverable theater range missiles. This affirms the decision of the Trump administration to depart the 1987 Intermediate Nuclear Forces (INF) Treaty with Russia and to begin developing new theater-range ballistic and hypersonic missiles for all U.S. military services. But the United States may also need to be ready to rapidly build up its ICBM forces.

When U.S. forces, with allies and partners in Asia, can deploy 1,000 or more missiles, it will be possible to deter China from launching attacks against democracies near and far.