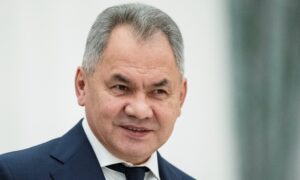 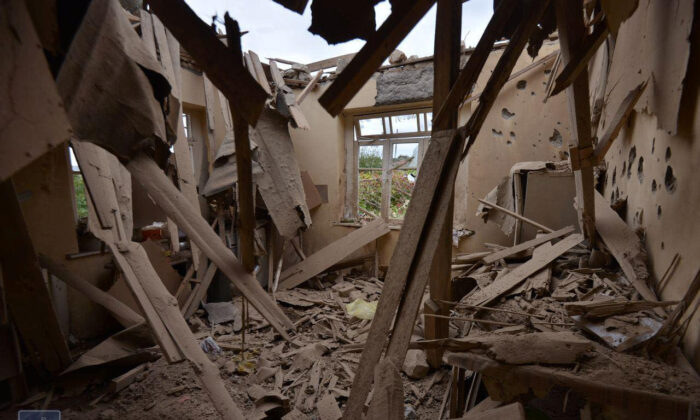 An interior view shows a house, which locals said was damaged during a recent shelling by Azeri forces, in the town of Martuni in the breakaway Nagorno-Karabakh region, on Sept. 28, 2020. (Foreign Ministry of Armenia/Handout via Reuters)
Europe

Armenian, Azeri Forces Accuse Each Other of Shelling Far From Karabakh

BAKU/YEREVAN—Armenia and Azerbaijan accused each other on Tuesday of firing into each other’s territory, far from the Nagorno-Karabakh conflict zone, as the worst spate of fighting since the 1990s raged for a third day and the civilian death toll mounted.

Dozens have been reported killed and hundreds wounded since the fierce clashes between Azerbaijan and its ethnic Armenian mountain enclave of Nagorno-Karabakh broke out on Sunday in a new eruption of a decades-old conflict.

Azerbaijan’s President Ilham Aliyev said 10 civilians had been killed by Armenian shelling since Sunday. There was no official information about casualties among Azeri servicemen.

The Armenian defense ministry said an Armenian civilian bus in Vardenis—a town in Armenia at the border with Azerbaijan and far from Nagorno-Karabakh—caught fire after being hit by an Azeri drone, but no one appeared to be hurt. It said it was making further checks.

Nagorno-Karabakh is a breakaway region that is inside Azerbaijan but is run by ethnic Armenians and is supported by Armenia. It broke away from Azerbaijan in a war in the 1990s, but is not recognized by any country as an independent republic.

Any move to all-out war could drag in major regional powers Russia and Turkey. Moscow has a defense alliance with Armenia, which provides vital support to the enclave and is its lifeline to the outside world, while Ankara backs its own ethnic Turkic kin in Azerbaijan.

German Chancellor Angela Merkel called for an immediate ceasefire and de-escalation of the conflict between Azerbaijan and Armenia in phone calls with the countries’ leaders, government spokesman Steffen Seiber said on Tuesday.

The Armenian defense ministry said in a statement that Azeri armed forces opened fire on a military unit in Vardenis, but that the situation was generally less tense on the border.

Azerbaijan’s defense ministry said that from Vardenis the Armenian army had shelled the Dashkesan region inside Azerbaijan. Armenia denied those reports.

Azerbaijan on Sunday reported the death of five members of a single family. Armenia said on Tuesday that a 9-year-old girl was killed in shelling, while her mother and a brother were wounded.

A mother and her child were killed in Martuni on Sunday, the defense ministry of Nagorno-Karabakh said.

The clashes have reignited concern over stability in the South Caucasus region, a corridor for pipelines carrying oil and gas to world markets.

Armenia is considering the possibility of concluding a military-political alliance with Nagorno-Karabakh, Lilit Makunts, an MP from the ruling My Step alliance, wrote on her Facebook page.

Azerbaijan’s defense ministry said both sides had attempted to recover lost ground by launching counter-attacks in the directions of Fizuli, Jabrayil, Agdere, and Terter—Armenian-occupied areas of Azerbaijan that border Nagorno-Karabakh.

Armenia reported fighting throughout the night, and said that Nagorno-Karabakh’s army had repelled attacks in several directions along the line of contact.