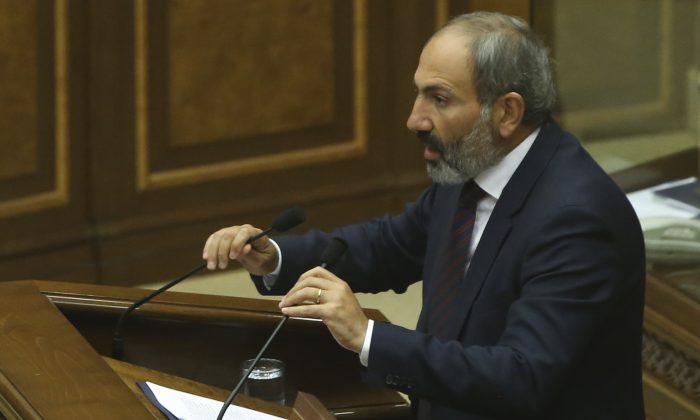 YEREVAN—Armenian opposition leader Nikol Pashinyan urged supporters to take to the streets on Tuesday, May 1, to pressure parliament to choose him as prime minister, and warned of a political “tsunami” if ruling officials stays in power.

Pashinyan led days of protests that forced veteran leader Serzh Sarksyan to step down as prime minister last week, and is the sole nominee to take over the role. But he needs approval from a parliament dominated by Sarksyan supporters.

As tens of thousands of people gathered in central Yerevan, Pashinyan told lawmakers before a vote on his candidacy that Sarksyan’s backers in the ruling Republican Party should not snub the Armenian people’s demands for change.

“You would think that in the situation that has unfolded conclusions would have been drawn, but the Republican Party has started to play cat-and-mouse with the people,” said Pashinyan, who had swapped his usual camouflage T-shirt for a suit and tie.

Addressing Republican Party officials, he said: “Your behaviour, treating the tolerance of the people as a weakness, could become the cause of a tsunami.”

“Don’t stay at home, and right now, go out into the streets if you have not done it yet … Flood out onto the streets and the squares of the capital and other towns in the republic.”

Supporters in the square waved the Armenian flag and carried balloons in the national colours. They blew horns and chanted “Nikol—prime minister!”

“I’m sure we will win today, Armenia will win!” said Suren Gevorkyan, a 19-year-old student wearing a T-shirt with Pashinyan’s portrait.

Pashinyan has received the support of opposition parties which together hold 47 seats in the 105-seat legislature, but he will require a majority to win.

If Pashinyan does become prime minister, it would signal a dramatic shift in power in ex-Soviet Armenia, which has been dominated by the same cadre of leaders since the late 1990s.

The country of around three million people borders Turkey and Iran and is locked in a simmering territorial conflict with another neighbour, Azerbaijan.

Armenia is closely aligned with Moscow, and is home to Russian military bases.

Officials in Moscow have been watching the turbulence in Armenia closely for signs it could follow the pattern of Georgia and Ukraine, where popular revolts installed leaders who pulled their countries out of Moscow’s orbit.

Pashinyan, a 42-year-old former newspaper editor, said in his speech to parliament on Tuesday that, if elected, he would maintain a close relationship with Moscow.

By Hasmik Mkrtchyan and Margarita Antidze