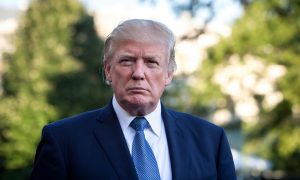 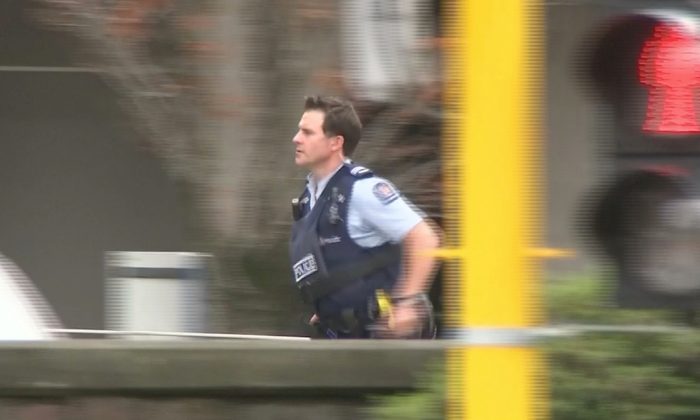 A police officer is seen after reports that several shots had been fired at a mosque in central Christchurch, New Zealand, on March 15, 2019. (TVNZ/via REUTERS TV)
Asia & Pacific

An armed congregation member chased after and fired twice at the gunman who slaughtered 49 people at two mosques in the New Zealand city of Christchurch on March 15, the New Zealand Herald reported.

The man—identified only as a well-known area resident and a Muslim—left the scene of the Linwood mosque when gunfire broke out before returning with a firearm to engage the gunman.

He reportedly fired two rounds at the shooter as he sped off in a getaway vehicle.

“They were in a silver Subaru,” the man told police.

The armed congregant reportedly told the authorities he was firing in “self defense.”

At least 49 people were killed in multiple shootings at two Christchurch mosques.

The Linwood mosque shooting claimed at least seven lives while a second shooting, at the Al Noor mosque, resulted in at least 41 dead.

Police also found and defused explosive devices attached to a vehicle outside of one of the mosques.

At least 48 people, some in critical condition, were being treated at Christchurch Hospital for gunshot wounds, authorities said.

“It is clear that this can now only be described as a terrorist attack,” New Zealand Prime Minister Jacinda Ardern said of Friday’s carnage.

She pronounced it “one of New Zealand’s darkest days.”

Authorities have announced murder charges against a man suspected of being the gunman in New Zealand’s worst mass shooting in history.

Police said a total of three people had been arrested in connection with the incident but did not identify those taken into custody and gave no details except to say that none of them had been on any watch list. They did not immediately say whether the same person was responsible for both shootings.

Australian Prime Minister Scott Morrison confirmed one of the suspects was an Australian national.

“I can confirm that the individual who was taken into custody I have been advised is an Australian-born citizen,” Morrison told reporters in Sydney on Friday.

A man who seemed to claim responsibility for the shootings, 28-year-old Brenton Tarrant, an Australian citizen, allegedly left a 74-page manifesto in which he explained who he was and his reasoning for the attack, although police have not confirmed he is the shooter.

An Epoch Times reporter has viewed the document.

It remains unclear whether the other two people arrested will be charged with any crimes.

The gunman live-streamed part of his attack on the Al Noor mosque, creating a sickening 17-minute video that has been widely distributed on social media, CNN reported.

“Police are aware there is extremely distressing footage relating to the incident in Christchurch circulating online. We would strongly urge that the link not be shared. We are working to have any footage removed,” wrote New Zealand police on Twitter.

Meanwhile, tech companies such as Facebook were working to take down the video, Fox News reported. A spokeswoman for Facebook New Zealand, Mia Garlick, said that such videos were quickly taken down.

“New Zealand Police alerted us to a video on Facebook shortly after the livestream commenced and we removed both the shooter’s Facebook account and the video. We’re also removing any praise or support for the crime and the shooter or shooters as soon as we’re aware,” she told CNN.

“Shocking, violent and graphic content has no place on our platforms, and is removed as soon as we become aware of it,” read the statement from the Google-owned video sharing company. “As with any major tragedy, we will work cooperatively with the authorities.”

He wrote in a tweet, “49 innocent people have so senselessly died, with so many more seriously injured. The U.S. stands by New Zealand for anything we can do. God bless all!”

Queen Elizabeth II, who is New Zealand’s head of state, said in a message to the country she was “deeply saddened by the appalling events in Christchurch” and sent condolences to families and friends of victims. The queen also paid tribute to emergency services and volunteers supporting the injured.

“At this tragic time, my thoughts and prayers are with all New Zealanders,” she said in her message.

European Commission President Jean-Claude Juncker tweeted that he learned of the attack “with horror and profound sadness.”

“The European Union will always stand with #NewZealand and against those who heinously want to destroy our societies and our way of life,” he wrote.

All mosques in New Zealand had been asked to shut their doors and armed guards posted at them, police said, adding they were not actively looking for any other “identified suspects.”

With additional reporting by Reuters and The Associated Press.