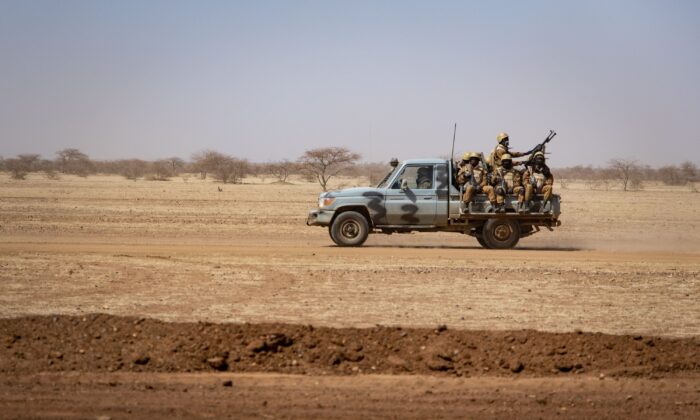 Soldiers patrol aboard a pick-up truck on a road in Burkina Faso, on Feb. 3, 2020. (Olympia De Maismont/Getty Images)
Africa

OUAGADOUGOU—Armed assailants have killed about 50 people in a part of eastern Burkina Faso ravaged by Islamist violence, the region’s governor said on Thursday.

It was not immediately clear who was behind the attack on Wednesday against residents of the rural commune of Madjoari, said Colonel Hubert Yameogo, the governor of the East Region.

The victims were traveling to a town in the nearby commune of Pama, close to the borders with Benin and Togo, Yameogo said in a statement.

The violence has expanded and intensified in the past decade, killing thousands of civilians each year.

The conflict is now spilling over into coastal West African countries like Benin and Togo. Eight soldiers were killed and 13 wounded in northern Togo this month in what was likely the first deadly raid in Togo by Islamist terrorists.

Wednesday’s attack in Burkina Faso followed two others this month in Madjoari. One killed 17 civilians and another killed 11 soldiers.