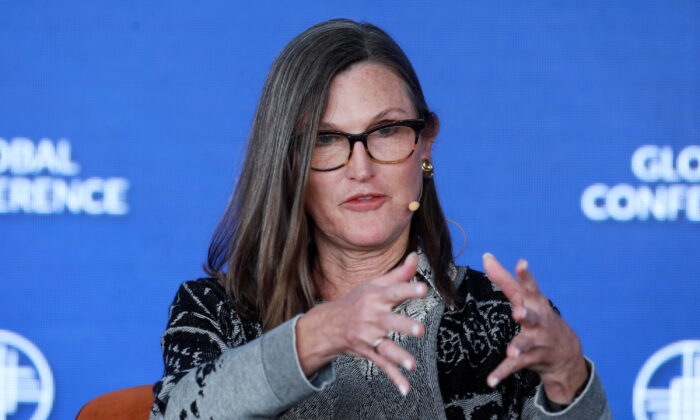 NEW YORK—The Federal Reserve is ignoring signs of deflation as it continues its aggressive interest rate-hike plan to combat inflation and will soon be forced to make a dovish pivot, star stock picker Cathie Wood of Ark Invest said in a webinar on Tuesday.

“The market has figured out the Fed is making a mistake,” Wood said, leaving U.S. stocks “in a bottoming process.”

Wood, whose ARK Innovation ETF was the top-performing fund of 2020 thanks to bets on companies like Zoom Video Communications Inc which soared during the early stages of the coronavirus lockdown, cited declines in copper, oil, and gold prices as signs that fears of sustained inflation are overblown.

The Federal Reserve is widely expected to raise benchmark interest rates by 75 basis points at its next policy meeting, on July 26–27, following a 75 basis point increase in June.

ARK Innovation is up 11.6 percent over the last month, compared with a 1.9 percent increase in the benchmark S&P 500, as rising concerns over a possible U.S. recession have boosted growth stocks. The fund remains down nearly 53 percent year-to-date, which puts it in last place among the 605 U.S. mid-cap blend funds tracked by Morningstar.