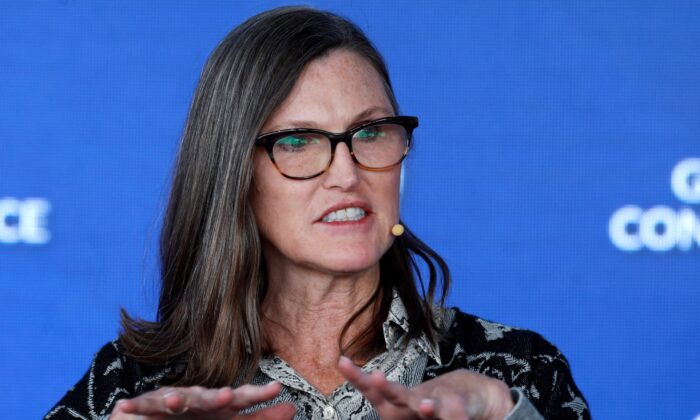 NEW YORK—Star stock picker Cathie Wood of Ark Invest cautioned that the Federal Reserve is making a mistake with its widely-expected interest rate hikes to bring down high inflation and said she is more concerned about deflation.

The benchmark S&P 500 fell more than 2 percent and Treasury yields surged Tuesday after data showed consumer prices did not ease as anticipated in August and price pressures appeared to broaden. Markets are now anticipating a 100 percent probability the Fed raises benchmark interest rates at least 75 basis points at its meeting that concludes on September 21.

Wood, however, said falling commodity and freight charges, as well as stable gold prices, suggest the supply chain issues that pushed inflation to 40-year highs are moderating. At the same time, she said the U.S. economy is likely in recession, which will bring down price pressures.

The Fed’s push to raise interest rates “will prove a mistake,” Wood said.

Wood said that Ark estimates global “disruptive innovation” stocks are now worth roughly $8 trillion in market value, which the firm expects to increase to $200 trillion within the next 8 to 10 years.

Ark Innovation is down 54.4 percent for the year to date, a performance that puts it at the bottom of the 597 U.S. mid-cap growth funds tracked by Morningstar.