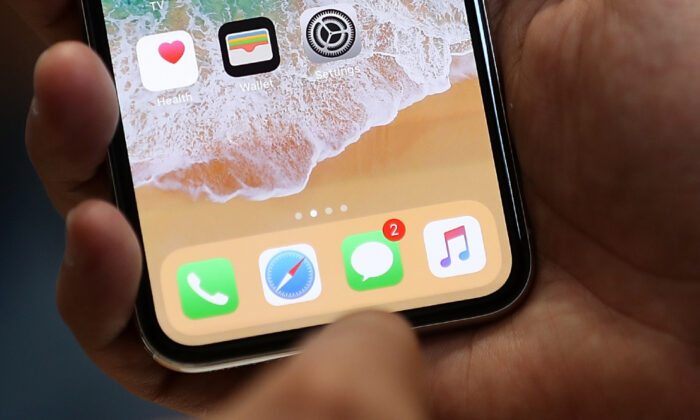 The new iPhone X is displayed during an Apple special event at the Steve Jobs Theatre on the Apple Park campus on Sept. 12, 2017 in Cupertino, Calif. (Justin Sullivan/Getty Images)
people

A 23-year-old woman who lost her father four years ago but continues to text his phone every day has revealed the moment she got a response to her messages.

Chastity Patterson, from Newport, Arkansas, said she still regularly messaged her late father every day to let him know how her day was going.

However, on Thursday evening before the fourth anniversary of his death, she received a surprising response.

Posting photos of the conversation on Facebook, Patterson wrote: “I text my dad everyday to let him know how my day goes, for the past Four years!

“Today was my sign that everything is okay and I can let him rest!”

In her message to her father’s phone, Patterson said: “Hey Dad, it’s me. Tomorrow is going to be a tough day again.

“It’s been four years since I lost you and not a day goes by that I don’t miss you. A lot has happened in that small time, but I’m sure you know since I tell you all the time.

“I beat cancer and I haven’t gotten sick since you were here, like I promised you I would take better care of myself!”

She then explained some of the highs and lows she had gone through over the past few years, such as successfully finishing college and graduating with honors and falling in love, only to be left heartbroken.

Patterson said: “I lost all my friends and hit rock bottom, but I found someone who came into my life and saved me! I don’t have any children yet, you would be so happy, but I’m ready.”

Her heartbreaking message continued: “I’m sorry I wasn’t there when you needed me the most, but one day we will have our chance to watch that game!

“I’m afraid of marriage because I’ll have to walk that long aisle alone and you won’t be there to tell me everything will be okay,” she added.

Despite a turbulent few years, Patterson concluded: “I’m doing great, you would be so proud of the woman I have become. No, my smart mouth and attitude has not changed and no I have not gained weight, it only goes to my head! I just wanted to say I love you and I really do miss you.”

Unexpectedly, she received a sweet response from the man who had been receiving her daily messages for the past four years.

It read: “Hi sweetheart, I am not your father, but I have been getting all your messages for the past four years. I look forward to your morning messages and your nightly updates.

“My name is Brad and I lost my daughter in a car wreck August 2014 and your messages have kept me alive. When you text me, I know it’s a message from God.

“I’m sorry you lost someone so close to you, but I have listened to you for years and I have watched you grow more than anyone.”

Brad continued: “I have wanted to text you back for years, but I didn’t want to break your heart.”

He told her that she was an “extraordinary woman” and hoped his daughter would have become the woman Patterson is, adding: “I’m sorry you have to go through this but if it makes it any better, I am very proud of you! P.S. I think your father would be happy to know you bought another dog instead of having children.”

In a later post on Facebook, Patterson explained that the father she had lost, Jason Ligons, was not her biological father but that she called him “dad” thanks to the close bond they had shared.

Speaking of their close relationship, she wrote: “He never missed a school dance, prom, my games … I’ve cried with him, told him everything and even became very independent because he took the time to love me and show me what happiness looks like.”