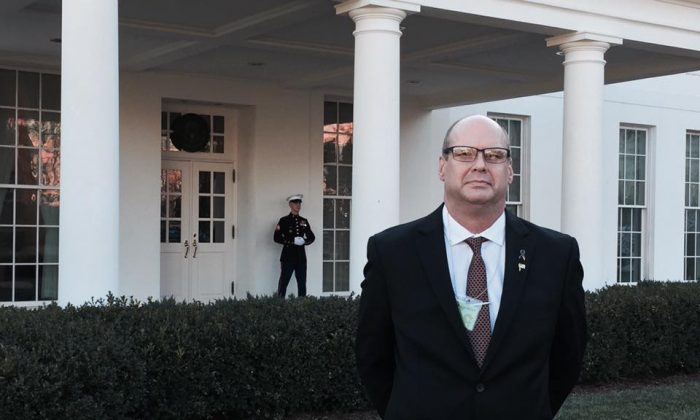 “Angel Dad” Steve Ronnebeck, whose son Grant was shot and killed by an illegal alien, is running for Congress as a Republican in Arizona’s 3rd Congressional District in 2020 against incumbent Democratic Rep. Raúl Grijalva.

“It’s going to be a complete grassroots campaign. I’m going to be spending a lot of time in CD-3. I do not live in CD-3 as of yet, but Raul Grijalva’s district has 16 percent of the border in Arizona, and it is probably the worst 16 percent on the Arizona border and probably the second-worst district along the southern border. It includes the Yuma sector,” he said, noting that he can run in the 3rd district by virtue of the fact that he lives in the state of Arizona.

Ronnebeck said that U.S. citizens are being harmed every day at the hands of illegal aliens, and that border security will be the paramount issue of his campaign.

His son Grant was killed at the age of 21 while working the overnight shift at a convenience store, when an illegal immigrant shot him “point blank” in the face.

“Grant did everything right. He handed him the pack of cigarettes,” he said of the 2015 murder, which galvanized him to become a political activist. “Grant paid the ultimate price for our failure on illegal immigration.”

Since then, Ronnebeck has become a leader in the Angel Families community, and stood next to President Donald Trump in the Oval Office in March, when Trump vetoed a bill that sought to block Trump’s national emergency declaration to build the southern border wall.

“I have heard that Grijalva is an alcoholic. I have heard all the rumors. I have also heard that Grijalva has been brought up to the Ethics Committee,” Ronnebeck said, referring to a House Ethics Committee investigation into whether Grijalva created a hostile workplace for a female staffer. The committee was still reportedly conducting the investigation as of June of this year.

“Grijalva wants open borders. He is a self-proclaimed socialist. And one of the biggest problems that we have in our country right now, and one of the most hateful situations, is these socialists, including Grijalva and the Squad, that are spreading their rhetoric and their narrative and then turning around and blaming it on Republicans.

“You don’t hear Republicans out there spewing hate, calling for impeachment, and calling people Nazis and racists. I’m absolutely sick of it. I’m sick of the way our country is going. I’m sick at the thought of our country becoming socialist.

“People like Grijalva, Rashida Tlaib, and AOC [Alexandria Ocasio-Cortez] are trying to dismantle our Constitution, and by God, I just won’t sit there and let it happen.”

Ronnebeck said that he has assembled a small team and will begin campaigning, and hopes that Trump will support him.

“I hope so. I really do hope so. Our president needs people to support him. I supported him for his campaign. I think he’d love to see an Angel Parent go to Congress,” Ronnebeck said.

“I’d like Congressman Grijalva to know that I’m motivated.”