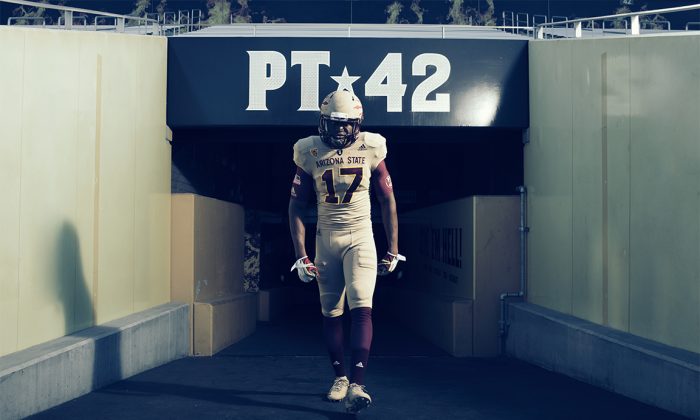 Arizona State’s football team is partnering with the Pat Tillman Foundation to pay tribute to veterans and active members of the U.S. military.

They will do so by unveiling a new, special edition, one of a kind “Brotherhood” uniform.

According to an Adidas press release, the Sun Devils plan to unveil the uniforms on Nov. 4, during their game against the Colorado Buffaloes.

The design of the uniform was inspired by Tillman’s legacy, an Arizona State alumnus and former safety for the Arizona Cardinals.

Tillman inspired many when he set aside his successful football career back in 2002 to enlist in the U.S. Army in response to the 9/11 terror attacks. He was killed in April 2004 while serving with the 75th Ranger Regiment in Afghanistan.

To honor Tillman and the thousands of other men and women who made that sacrifice, Arizona State’s players will wear the tan uniforms, inspired by Army fatigues with a design similar to the Sun Devils’ jerseys in 1996, the same season the late football star helped lead Arizona State to the Rose Bowl, according to the press release.

The unique uniforms will debut as part of Arizona State University’s campus-wide Salute to Service initiative.

In particular, it’s the helmets that are especially noteworthy. The back of each player’s helmet will highlight the word “Brotherhood” to pay homage to the soldiers. There will also be the names of all the Arizona State athletes and coaches who have served in the U.S. armed forces.

Another design in the uniform includes the phrase “Give ‘em Hell,” a line from the ASU fight song, which Pat famously uttered to his teammates prior to beating defending National Champion Nebraska 19-0 in 1996, according to the press release.

As the NFL’s national anthem protests continue, it seems that the Sun Devils are making a clear statement, and will be honoring the people that we should all stand for.