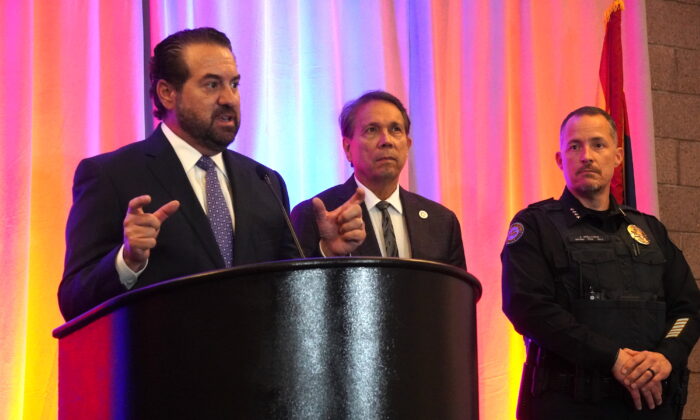 Arizona Taking Fight Against Human Trafficking to Next Level

SCOTTSDALE, Ariz.—Arizona Attorney General Mark Brnovich hailed Scottsdale as the state’s first city to train a majority of its public employees to detect the warning signs of human trafficking.

Approximately 1,700 of the city’s 2,000 public employees have received free training through the Arizona Anti-Trafficking Network (AATN) and its CEASE (Cities Engaged Against Sexual Exploitation) program.

Brnovich said Scottsdale is the first city in Arizona to be designated a CEASE-certified community in 2022.

“Raising awareness is one of the best weapons in our fight against human trafficking,” he said in a statement. “Training employees to recognize and respond to the warning signs of this terrible crime can make a life-saving difference for victims in need.”

Brnovich and city officials held a June 22 press conference at the Hotel Valley Ho in Scottsdale, the first hotel in Arizona to receive AATN program certification in 2020.

About 220 hotel employees received training in the key physical and emotional indicators of human trafficking.

According to Brnovich, tourism is a big industry in Scottsdale, where high-profile events draw millions of people every year—and with them, human trafficking.

Walther said the problem is one of supply and demand. Through the department’s new Human Exploitation and Trafficking Unit, Scottsdale law enforcement hope to make a considerable dent in the problem.

Since receiving the training, at least three city employees have identified signs of human trafficking and reported back to authorities, he said.

The AATN works in partnership with the Arizona Attorney General’s Office and Homeland Security Investigations (HSI) to address the problem in Arizona.

AATN President and Board Chairman John Meza said his organization operates with five community impact programs that target human trafficking by teaching how to identify, report, and address it.

Brnovich said his office has successfully prosecuted 300 cases of human trafficking, while another 200 cases are pending.

“We have an obligation to protect the most vulnerable,” he said. “This is something we can’t do alone and that prosecutors and police officers can’t do alone. It takes the entire community to combat this issue.”

Working with AATN “allows us to take the fight to the next level,” according to Brnovich.

Meza said the organization’s SAFE (Safeguarding All From Exploitation) program teaches people how to recognize and respond to the red flags of human trafficking. He said a community effort is crucial to solving the problem.

“Together, we are more effective,” he said.