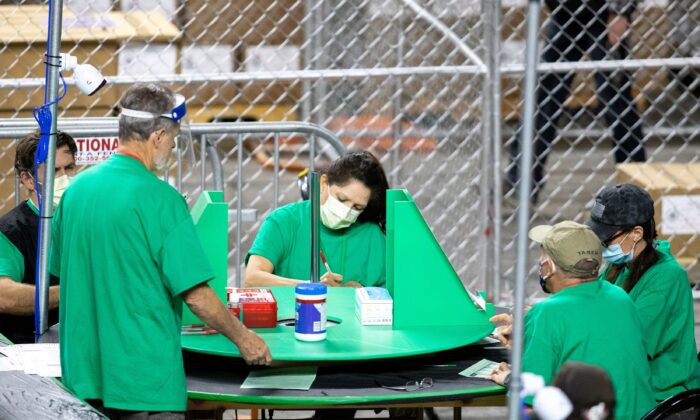 Contractors working for Cyber Ninjas, who was hired by the Arizona Senate, work during a 2020 election audit at Veterans Memorial Coliseum in Phoenix on May 1, 2021. (Courtney Pedroza/Getty Images)
By Zachary Stieber

Arizona senators issued a new subpoena to the state’s largest county on July 26 for materials related to the 2020 election.

The Republican-controlled board was also commanded to provide all findings concerning any systems breach that took place within six months of the Nov. 3, 2020, election, as well as all usernames and passwords for machines used in the election.

The board was also told to appear at the Arizona State Capitol for a hearing on Aug. 2.

Failure to comply may constitute contempt of the Legislature, the board was told.

Fann said in a statement that the county “continues to withhold vital information from the public and the auditors which has created additional costs, months of delays and a lack of transparency on their part.”

A board spokesman told media outlets that the county “has already provided everything competent auditors would need to confirm the accuracy and security of the 2020 election.”

“The board will review the materials requested with our legal team and respond in the coming days,” the spokesman said.

Senators also subpoenaed information from Dominion Voting Systems, whose machines Maricopa County leases. Dominion said in a statement to news outlets that it wouldn’t comply with the subpoena, which seeks administrative passwords for the machines.

Contractors hired by the Republican-controlled state Senate have been conducting an audit of the 2020 election in Maricopa County since April. The county submitted the nearly 2.1 million ballots cast in the election, as well as 385 tabulators and other items.

Those items were ordered to be turned over by subpoenas issued late last year.

But county officials also refused to provide some of the subpoenaed items, despite a judge ruling the subpoenas lawful after the county claimed that they were overbroad and outside the scope of the Arizona Senate’s authority.

County officials said in May that they couldn’t hand over routers or router images, because doing so would pose a security risk.

Arizona senators initially threatened to issue a fresh subpoena then. It isn’t clear why they waited until July 26 to do so.

The Arizona Senate voted in February, before the judge ruled on the matter, on a resolution to hold the county in contempt. One Republican, state Sen. Paul Boyer, sided with Democrats, preventing the resolution from being approved.

Boyer recently came out in opposition to the audit, after previously supporting it. Another Republican, Sen. Michelle Ugenti-Rita, also went from supporting the audit to opposing it.

“I wanted to review our election processes and see what, if anything, could be improved. Sadly, it’s now become clear that the audit has been botched,” Ugenti-Rita wrote on Twitter.

She was booed off the stage at a conservative event over the weekend after her shift on the audit.

Boyer and Ugenti-Rita didn’t respond to requests by The Epoch Times for comment by press time.

Arizona Sen. Wendy Rogers, a Republican who still backs the audit, told The Epoch Times that she thinks the breakaway Republicans will eventually support the review again.

“I believe both of those colleagues of mine and Democrats will see all of the data points for what they will show and will eventually get on to the right side of history,” she said.