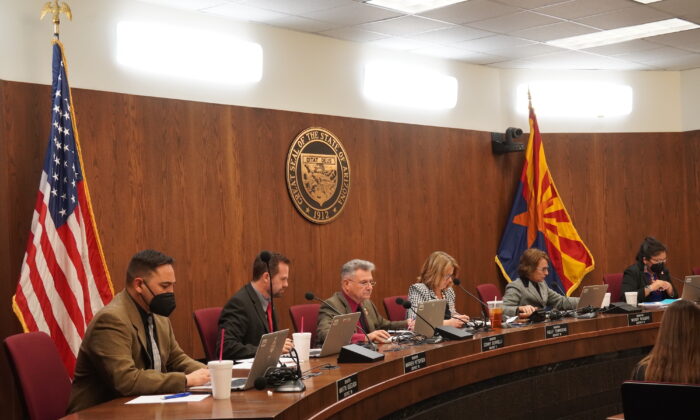 Members of the Arizona Senate Committee On Government voted to recommend passage of six more election related bills to the full state Senate at a hearing in Phoenix on Jan. 31, 2022. (Allan Stein/The Epoch Times)
Arizona

An Arizona Senate subcommittee passed six more pieces of legislation on Jan. 31 aimed at shoring up the state’s electoral process following a disputed 2020 election and ballot audit and recount in Maricopa County.

The bills were passed by the Senate Committee On Government along party lines, with the committee’s Republican majority edging out Democrats mostly on 4-3 votes. On Jan. 24, the committee voted in similar fashion to recommend eight other election integrity bills for a full Senate vote.

On Monday, the committee adopted SB1260, proposed by Sen. Javan Mesnard (R), which introduces and clarifies language regarding electors who register to vote in more than one county.

Other proposed safeguards in the bill include a requirement that voters report ballots received at the address of a former tenant, and that county recorders remove voters from the voting list once it has been confirmed that they have moved away.

Those who knowingly vote in more than one place will be guilty of a Class 5 felony fraud charge.

Sen. Sally Ann Gonzalez (D) voted against the bill and argued there is “no evidence of undocumented people voting in Arizona or around the country.”

SB1056 would render misplaced ballots invalid if they weren’t included in the initial tally at a polling place for early and provisional ballots. Any person who misplaces a ballot as prescribed in the legislation would be guilty of a Class 2 misdemeanor, according to the bill’s language.

“If a ballot is misplaced and cannot be counted as stated in the provision the voter of that misplaced ballot may file an action for damages against the government organization administering the election … for the loss of the right to vote.”

“Evidence shows votes were not handled with chain of custody,” said Sen. Wendy Rogers (R), in reference to the 2020 election in Maricopa County. “There are a lot of people who have a problem with that.”

Committee vice-chairman Sen. Sonny Borrelli (R) said the legislation will ensure those who misplace ballots will be held accountable.

SB1055 would hold election contractors liable for damages if they fail to perform their duties under the terms of the contract and be considered guilty of a Class 2 misdemeanor.

SB1285 seeks to amend state laws regarding the Arizona secretary of state’s instructions and procedures manual to allow a “maximum degree of correctness, impartiality, uniformity, and efficiency on the procedures for early voting,” tabulating, and storing ballots.

“I would argue it is a very important manual because it allows the chamber to weigh in on how elections are run,” said Arizona Sen. Michelle Ugenti-Rita (R), the bill’s key sponsor.

“This, to me, actually provides more balance,” she told the committee.

“I think it’s dangerous for us to put this authority into a legislative body,” Quezada said.

“This process is not broken. All it will do is further politicize the issue,” he said.

SCR1005 would establish and define procedures for voters when obtaining a federal election ballot.

The bill states that any elector who is registered to vote using a federal voter registration form and who has not provided proof of citizenship may not receive a ballot “unless the elector provides identification” to the county recorder.

Proof of citizenship would include the voter’s driver’s license or its equivalent, birth certificate, U.S. passport, or certificate of naturalization.

Much of the proposed Senate legislation was filed in direct response to allegations of voter fraud in Arizona during the 2020 presidential election. An independent Senate-sponsored forensic audit found numerous ballot discrepancies and potential issues involving a combined total of 53,305 ballots.