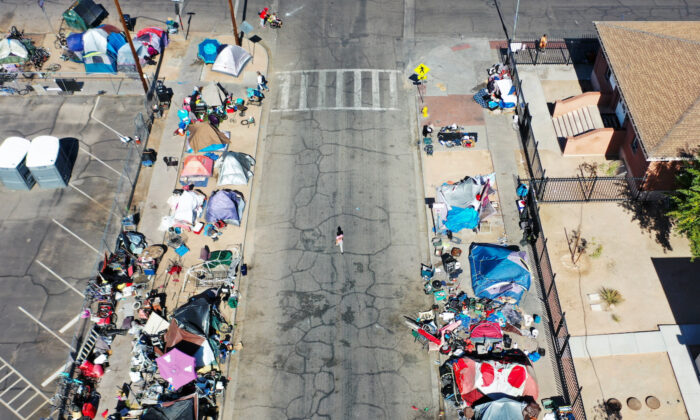 An aerial view of people gathered near a homeless encampment in the afternoon heat in Phoenix, Ariz. on July 21, 2022. (Mario Tama/Getty Images)
Arizona

A group of Phoenix, Arizona residents is suing the city over what they believe are policies that enable crime and unsanitary conditions to proliferate in a massive urban homeless encampment known as “the Zone.”

“This case is about the city of Phoenix’s failure to address—and its exacerbation of—the growing homelessness crisis within the city,” according to the suit.

The suit describes the plaintiffs as people who “live, work, or own businesses or property in the city of Phoenix between 7th and 15th Avenues and between Van Buren and Grant Streets.

“In the center of this area, along 9th and 13th Avenues from Jefferson Street to the railroad tracks south of Jackson Street, and along Jefferson, Madison, and Jackson streets from 8th to 13th Avenues, is what neighbors call “the Zone”–the largest homeless encampment in the State of Arizona.”

In the Zone, its inhabitants violate the law “with impunity. Residents endure daily violent crimes, physical assaults, and property damage. As a result, property values have plummeted while the piles of trash and human excrement have only increased.

“Most tragically, a great humanitarian crisis unfolds as homeless residents of the Zone die on a daily basis. This verified complaint challenges the legality and constitutionality of the city of Phoenix’s policies and actions with respect to homelessness, which have simultaneously neglected and exacerbated the crisis,” the suit states.

The suit said one plaintiff received a letter from the county declaring that he violated city ordinances for not keeping his alley clean—”notwithstanding the fact that it took a professional hazmat cleanup crew to clean the alley of all the feces and urine and needles.”

Homelessness within the Zone has tripled since 2016 along with the accompanying crime, drug use, and unsanitary conditions. As many as 500 homeless residents died in and around Phoenix during the first half of 2022, though most deaths were from drug use, and at least 10 percent were due to homicide.

According to the lawsuit, all of this activity takes place in the plaintiff’s backyard.

“In particular, the city of Phoenix has created a policy of concentrating its homeless population in Plaintiffs’ neighborhood. A substantial portion of the homeless population transported to and/or maintained in the Zone on city-owned and -operated easements comprises individuals experiencing mental illness and drug addiction.

The lawsuit contains photographs highlighting public nudity and excretion, including property crime, refuse, and other health concerns in the Zone.

The complaint challenges the legality of the city’s policies and actions concerning homelessness, which the city has “simultaneously neglected and exacerbated the crisis.”

“Not only is the city of Phoenix failing to provide these individuals with housing and needed services, it refuses to enforce in and around the Zone quality-of-life ordinances prohibiting loitering, disturbing the peace, drunken and disorderly conduct, drug use, domestic violence, and obstructing streets, sidewalks, or other public grounds,” the complaint alleges.

Rather than resolve the problem, the suit alleges the city “effectively invited” the population to build encampments close to residences and businesses.

“The city’s policies are not rationally designed to address any of the social ills facing the residents of the Zone and are exacerbating rather than alleviating their problems,” the suit adds.

The plaintiffs requested that the court declare the Zone a public nuisance and issue an injunction to prevent the city from taking further actions that would exacerbate the homeless problem.

In addition, the suit requests that the court find the city in violation of Arizona’s state constitution for allowing the situation to continue through its actions and policies.

Options to remedy the situation would include removal of the encampments or placing them in structured camping grounds on city-owned lots where “cleanliness is maintained and enforced.”

The complaint alleges the city of Phoenix has not responded to any plaintiffs’ proposals to resolve the crisis.

“The city of Phoenix is committed to addressing the needs of all residents and property owners as we work with local and regional partners to address the complex issues surrounding those experiencing homelessness,” Phoenix director of communications Dan Wilson told The Epoch Times in an email.

According to the city’s website, it also partnered to open a summer cooling facility in central Phoenix for 200 homeless people.

In a statement, Phoenix Mayor Mary Kate Gallego said, “Arizona’s summer heat can be deadly. We need to ensure that everyone, especially our most vulnerable residents, has a safe place to stay cool during our hottest months.”

The shelter is part of Phoenix’s “strong commitment to leading with services and connecting those unsheltered with the appropriate resources,” Gallego said.

The city-owned facility is a closed campus located near 28th and Washington streets.

“It’s really tough to have a conversation of bringing a shelter to a community, but I understood the need in our city and my district and the importance of it,” District 8 councilmember Carlos Garcia said in a statement.