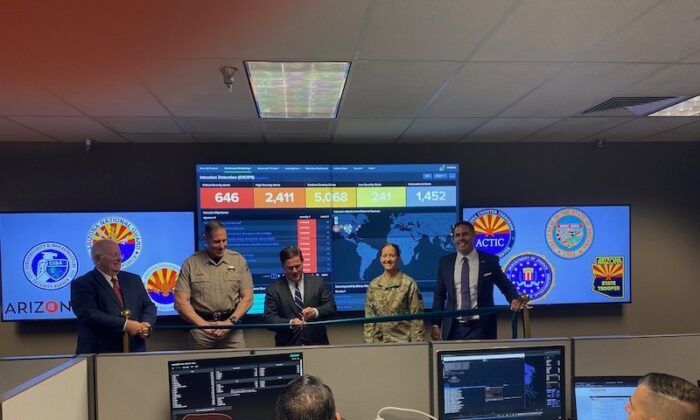 On Oct. 4, Gov. Doug Ducey announced the creation of a new Cyber Command Center at a ceremony at the Arizona Department of Public Safety’s (DPS) Counter Terrorism Information Center (ACTIC) in Phoenix.

“Cybersecurity is homeland security. Our society is becoming increasingly interconnected through technology, and cybersecurity has become one of the most important issues facing Arizona,” Ducey said in a statement.

In fiscal 2020, Arizona set aside $2.9 million to enhance cybersecurity controls and prevent threats on state IT equipment. The state also earmarked $3 million for enhancing the Arizona Department of Education’s school finance system, and will receive another $6 million for cyber security in fiscal 2022, which began July 1.

Ducey said the new command center will play a critical role in protecting Arizonans and securing the state’s cyber infrastructure against cyber threats.

“I’m hopeful that the U.S. Department of Homeland Security (DHS) will recognize the success of these partnerships on cybersecurity and begin to treat border security just as seriously,” he said.

The command center will serve as Arizona’s headquarters for coordinating statewide cybersecurity operations.

Ducey added the goal is to promote the formation of public and private partnerships to guard against future cyber attacks.

The new command center will serve as a hub for state agencies to share information with one another to enhance their operations, the governor said.

The Arizona Counter Terrorism Information Center is a joint effort by the Arizona DPS, DHS, Federal Bureau of Investigation (FBI), and other agencies. Its primary mission is to support Arizona’s homeland security efforts.

“I’m glad to hear we are finally taking cybersecurity seriously,” Arizona Rep. Mark Finchem (R) told The Epoch Times. “I’m glad to hear that the governor is looking at setting up something so maybe, in the next election, we can have the safest, most secure election in history.”