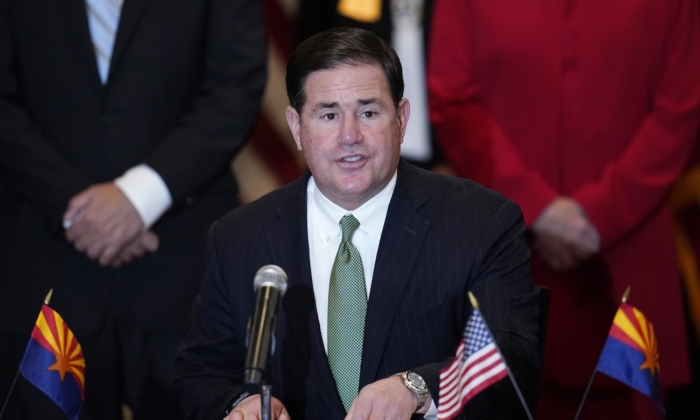 Arizona Gov. Doug Ducey, a Republican, announced he will not provide funds to school districts that attempt to impose mask requirements for students in the state.

The governor said that district and charter schools in Arizona that follow state laws will be eligible for $163 million in grant funding that is intended to boost per-student spending.

But Ducey, in a statement, said that schools that impose mandates that go against state laws—including mask mandates—won’t receive the funding. According to the governor’s website, Arizona doesn’t mandate masks, vaccinations, or vaccine passports.

“Parents are in the driver’s seat, and it’s their right to make decisions that best fit the needs of their children. Safety recommendations are welcomed and encouraged–mandates that place more stress on students and families aren’t,” the governor said in a statement Tuesday. “These grants acknowledge efforts by schools and educators that are following state laws and keeping their classroom doors open for Arizona’s students.”

Ducey has been at odds with state Democrats and other state leaders such as Superintendent Kathy Hoffman, some city leaders, and school districts over mask mandates. Some school districts in the state started imposing mask mandates on children, ostensibly following recommendations on masking handed down by the U.S. Centers for Disease Control and Prevention (CDC) last month.

And after Ducey’s announcement on Tuesday, Hoffman criticized the governor’s move to deny funding, writing in a statement that “this is yet another outrageous attack on public education” and said he should be “listening to school leaders and educators” instead.

“The Governor’s gambit to deny American Rescue Plan funds to schools following CDC guidance not only puts students at risk—it violates the law as written by Congress,” wrote Rep. Greg Stanton (D-Ariz.), referring to the White House-backed stimulus bill passed earlier this year. He called on the federal Department of Treasury to “make clear that these funds should go to all schools.”

Across the United States, school districts forcing students to wear masks have become a contentious issue as several major studies have found masks on children are ineffective.

One study from Yale University found that child care programs that remained open during the early stages of the COVID-19 pandemic didn’t contribute to the spread of the virus. And in April, a Journal of American Medical Association (JAMA) study published in April found that children are at low risk of developing COVID-19 and also don’t play a significant role in the spread of the virus.

Meanwhile, a study in March from the CDC found there were more virus-related illnesses in Florida school districts that didn’t implement mask-wearing, although the study found that at the time the instances of school-related COVID-19 cases were small statewide.

The World Health Organization (WHO) says on its website that children under the age of 6 “should not be required to wear masks,” which is “based on the safety and overall interest of the child and the capacity to appropriately use a mask with minimal assistance.”

A number of U.S. jurisdictions that have imposed or re-imposed mask mandates have stipulated that children aged 2 and younger should not be required to wear masks.

Some researchers said that mask-wearing won’t cause low oxygen levels in children.

David G. Hill, a physician and American Lung Association board member, wrote earlier this year that masks “absolutely” do not cause low oxygen levels, adding: “We wear masks all day long in the hospital.”

“The masks are designed to be breathed through and there is no evidence that low oxygen levels occur,” he said.