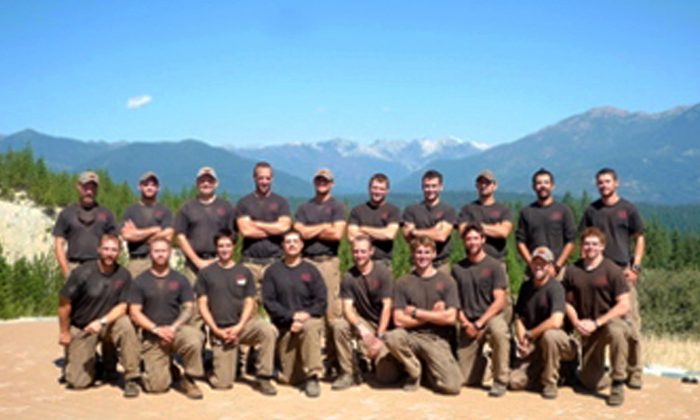 Members of the Granite Mountain Interagency Hotshot Crew from Prescott, Ariz., pose together in this undated photo provided by the City of Prescott. Some of the men in this photograph were among the 19 firefighters killed while battling an out-of-control wildfire near Yarnell, Ariz., June 30, 2013. (AP Photo/City of Prescott)
US

The names of 19 firefighters killed in the Yarnell Hill blaze in Arizona have been released. Among the men, most of them in their twenties, were some who’d just started their own families, some who were jokers, some who were thinkers, some who loved to toss the football around.

Kevin Woyjeck and Grant McKee were the youngest of the group, both aged 21. Woyjeck would accompany his father, Capt. Joe Woyjeck of the Los Angeles County Fire Department, to the station as a boy.

Keith Mora, an inspector with the department, told the L.A. Times:  “This young man was working with us trying to become like his father. … For something like this to happen is just a tragedy.”

Woyjeck was in a mentorship program at the department, and was also a trained paramedic. Mora described him as hardworking and always smiling.

McKee and his cousin, Robert Caldwell, 23, were both Granite Mountain Hotshots. Both died in the blaze Sunday.

“To have two grandsons gone, it’s devastation,” said their grandmother, Mary Hoffmann. An aunt, Laurie McKee, said: “Both of these boys were only interested in having a family life. Robert was newly married, and Grant was engaged. They just wanted the house and the dog.”

Caldwell was known as the smart one on the Hotshot team. Chase Madrid, who worked as a Hotshot for two previous years said: “He was one of the smart guys in the crew who could get the weather, figure out the mathematics. It was just natural for him.” Caldwell was a squad boss.

McKee described her nephew: “Robert was a gentle giant—he was man of few words.”

If Caldwell was a gentle giant, Clayton Whitted, 28, was of smaller stature, but had spirit.

Prescott High School football coach and physical education teacher Lou Beneitone recalled working with Whitted: “He wasn’t a big kid, and many times in the game he was overpowered by big men, and he still got after it.” Beneitone told USA Today that Whitted “worked his fanny off.”

Beneitone described sending Whitted off a few months ago as the wildfire season approached: “I shook his hand, gave him a hug, and said, ‘Be safe out there.’ … He said, ‘I will, Coach.'” An online guestbook has been set up for condolences or other comments in memory of Whitted.

“He had some athletic ability in him and he was a go-getter, too. You could pretty much see, from young freshman all the way, he was going to be physically active,” he said.

Ashcraft’s wife, Juliann, and his four children learned of his death from a news broadcast. “They died heroes,” she told USA Today, wiping away tears. “And we’ll miss them. We love them.”

Ashcraft was physically active, a characteristic Beneitone said is important for the Hotshots in general. It is a rugged job and it takes a certain character to endure, and even revel in, what some would consider hardships.

Scott Norris, 28, often talked to his boss about the lifestyle of the Hotshot crew. “I asked him once how long he went without a shower,” said Jim Marnell, co-owner of the Bucky O’Neill Gun Shop where Norris worked in the off-season, in an interview with the L.A. Times. “He said, ‘14 days.’ No showers. Sleeping in tents. And he loved it.”

Born and raised in Prescott, Norris was a bachelor who spent much of his leisure time in the mountains.

Travis Turbyfill, 27, commonly known as “Turby” was active like the other Hotshots, but also loved his Dairy Queen Blizzards.

Trainer Janine Pereira at Captain Crossfit, a common training location for the Hotshots, told AP that Turbyfill joked about missing workouts because it was important for him to spend quality time at Dairy Queen.

Burris bonded with another Hotshot, Garret Zuppiger, 27, over a common trait. “We both had a red beard and so we would always admire each other’s beards,” he said. “We also had a few conversations about beer.” Zuppiger’s blog reveals some of his humor. Zuppiger posted a ski-chair he built—a recliner on skis, according to Fox News.

Travis Carter, 31, was known as one of the strongest on the crew. “No one could beat him,” Pereira said of Carter’s time training at Captain Crossfit. “But the thing about him was he would never brag about it. He would just kill everyone and then go and start helping someone else finish.”

“The other guys who came in here always said that even though he was in charge, he was always the first one at the fire, the first one in action,” she told AP.

Anthony Rose, 23, would have become a father in October. His fiancée, Tiffany Hettrick, is pregnant, family members told NBC News. Rose grew up in Wisconsin, attended high school in Chicago, and moved to Arizona at the age of 16. An official at the Crown King Fire Department told NBC that Rose “blossomed” there.

Hettrick’s stepfather, Michael Mooney, told NBC that Rose “always wanted to be a firefighter, and he was living what he wanted to do. He’s with God now, so he’s OK.”

“I don’t warm up to too many people too much,” Mooney said, “but he was a very good guy, and I knew that right away.”

Eric Marsh, 43, was the oldest Hotshot and the Hotshot superintendent. He had a wife, but no children. His parents, John and Jane Marsh, had moved to Prescott from Ashe County about five years ago to be near Eric, their only son, according to the Jefferson Post.

“He was a great son. He was compassionate and caring about his crew,” his father told the Post. Marsh got into firefighting right out of high school. He studied biology at Appalachian State University.

Christopher MacKenzie, 30, had recently spent time with his mother, Laurie Goralski, in California’s San Jacinto Valley where he grew up. Goralski discovered she had a brain tumor and needed brain surgery. MacKenzie was by her side right away.

She talked to AZCentral in a taped interview, calm—stray tears streamed down her face as she spoke.

“He was extremely well-liked, he had a lot of friends. He kept in touch with everybody,” she said. He was overweight through his school years, but had realized he couldn’t do the things he wanted to carrying all that weight, she said. He worked hard and successfully lost the weight.

Dustin DeFord, 24, was from Ekalala, Mont., a town of fewer than 400 residents, according to the L.A. Times. His father is a Baptist pastor who has also volunteered at the local fire department.

The fifth of 10 children, DeFord always played rambunctiously with his siblings and was outgoing—the life of the party—his mother told the Times. “Even into his 20s, he was an innocent boy who never grew up,” Celeste DeFord said.

She spoke about his motivations for joining the Hotshots, noting that he did not fear death: “He loved the eliteness, the physical bars that were raised so high. … You had to achieve to be a part of those crews.”

“There was no fear. He had a simple faith in Jesus—that whatever he chose, it was going to be all right,” she said.

Sean Misner, 26, was expecting his first child in September. He met his wife, Amanda, when they were working at the same grocery store; they were married in September 2012, according to the Santa Maria Times.

The best man at his wedding, Jason Lambert grew up with Misner in Santa Ynez, a town of about 4,000 to 5,000 people in Santa Barbara County, Calif.

“You know how small-town life is,” Lambert told the Santa Maria Times. “You make the best out of nothing to do. We would have a great time just hanging out. I can’t believe he’s gone.” Misner loved sports, including snowboarding. He and his wife had decided on the name Jaxon for their expected son.

Jesse Steed, 36, “always put his life on the line for people who he knew he would never meet,” said his brother, Cassidy Steed, a police officer near Seattle, according to Seattle news outlet Komo News.

“He sacrificed time with his family and his own personal interests. Jesse loved his job very much as his family supported him with every sacrifice he made for it,” his brother said.

His Hotshot crewmates from previous years remembered Steed’s humor. Cooper Carr, a fellow Hotshot from 2001–2003 told AP: “He was a character. If you look at all the old photos of him, he was doing things to make people laugh. … He was good at impressions, and he sang songs; he was just great for morale. He’d just talk in a funny voice and have us all in stitches.”

Wade Parker, 22, was an active outdoors-man, a lover of Christian rock music, and a star on his high school baseball team. His youth pastor, Ronda Ehlert, recalled “a rambunctious little boy, always moving.”

“Later, he grew into a teenager who loved getting into boy things: hunting, dirt biking, camping,” she told AP.

Joe Thurston, 32, grew up in Cedar City, Utah. He used to sneak home the key to the local school pool, facilitating late-night swim parties, recalled his friend Scott Goodrich in an interview with the Salt Lake Tribune.

“He was definitely one of the daredevil types,” Goodrich said. “We went to Quail [Creek] Reservoir, and we’d be finding 40- to 50-foot cliffs that people would be scared to jump off. He would just show up and be front-flipping off of them,” he said. Thurston and Goodrich were in a band together, with Thurston on drums.

Another friend of Thurston’s, E.J. Overson, told the Tribune, “He was never one to shy away from a challenge or new experience.”

William Warneke, 25, served four years in the Marine Corps before joining the Hotshots, according to the Arizona Daily Star.

Warneke and his wife, Roxanne, were expecting their first child in December, according to California newspaper Press-Enterprise. Warneke and MacKenzie were both from Hemet, Calif. Warneke had served in Iraq, and had bought property in Prescott near his sister’s home upon his return.

His sister, Nancy Warneke, told the Press-Enterprise, “Even though it’s a tragedy for the whole family, he was doing what he loved to do. He loved nature and was helping preserve nature.”

John Percin Jr., 24, was an athletic youth. His aunt, Donna Percin Pederson, told AP: “He was probably the strongest and bravest young man I have ever met in my life.”

Geoff McEvers, who grew up playing baseball with Percin in West Linn, Ore., told Oregon Live: “It’s already tragic when you hear about those who died … but when you find out its someone you know personally, it’s tough.”