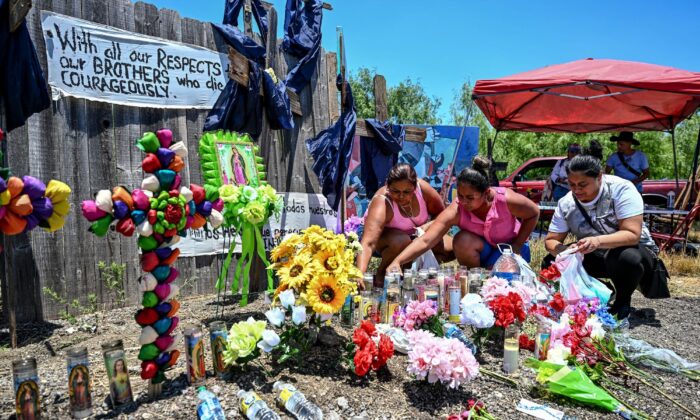 People place flowers and candles at a makeshift memorial where a tractor-trailer was discovered with deceased illegal immigrants inside, near San Antonio, Texas, on June 29, 2022. (Chandan Khanna/AFP via Getty Images)
US News

“Inaction by President [Joe] Biden has led to the worst border crisis in over 20 years,” Ducey wrote. “I’ve been outspoken about the impact this crisis has on Arizonans, our communities, and migrants.”

The effort will include a physical barrier and will also seek to address critical public safety staffing shortages. The state will also use the funds to modernize the technology and equipment to curtail criminal activity and human trafficking along the border.

“The number of migrant encounters has skyrocketed at our border, overwhelming law enforcement and Border Patrol,” Kavanaugh said in a statement.

“Thanks to the absent federal government, our border is in chaos and out of control. We need more support and physical barriers. This is a reasonable investment in Arizona’s safety and security.”

At the same time, he said it would enable law enforcement agencies to fight criminal activity associated with illegal immigration.

“Our nation is facing the worst border crisis in years due to the federal government’s inaction, and our communities are paying the price,” Pinal County Sheriff Mark Lamb said in a statement.

“Our state leaders and law enforcement have been taking action, doing all they can to protect Arizona. “It is crucial we have the necessary resources along the southern border, and I appreciate Gov. Ducey’s efforts to make that happen.”

However, Ducey said resolving the migrant crisis ultimately is the federal government’s responsibility.

The number of border crossings and arrests have hit record highs since the Biden administration ended enforcement of Title 42 in May.

In the meantime, the U.S. Customs and Border Patrol (CBP) anticipates as many as 2 million detentions by the end of the current fiscal year, up from 1.7 million in 2021.

The attempted border crossings due to human smuggling have often ended in tragedy.

In June 2022, 46 migrants were found dead inside an abandoned truck trailer in San Antonio, Texas. Border agents encountered a dozen other adults and four children, all suffering from heat exhaustion and heat stroke.

“This [$564 million] investment is critical to saving lives both on the border and within our communities,” Tim Roemer, director of the Arizona Department of Homeland Security, said in a statement.

“Not only is this a border crisis, it’s a humanitarian crisis—and it’s only getting worse.”

In April 2021, Ducey issued an emergency declaration and deployed the state’s National Guard to the southern border to support local law enforcement efforts there.