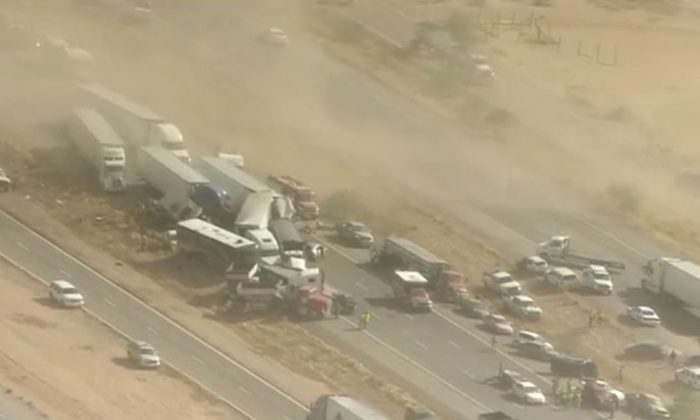 At least three people were killed in a massive accident and pile-up on Interstate 10 near Picacho Peak, Arizona, during a dust storm. At least 19 vehicles, including big rig trucks, motor homes, and a Toyota Prius, were involved.

High winds and dust were likely contributing factors in the crash.

ABC-15 reported that there were several serious injury collisions on the westbound portion of I-10.

Interstate 10 westbound was shut down due to the crash.

Department of Public Safety spokesman Raul Garcia told KPHO that several commercial vehicles were involved in the pile-up. He added there were several serious injury collisions.

Motorists are urged to avoid the area, officials said.

“It’s very different than what we think of during the monsoon. In this case, a steady southwest wind created channels of dense, blowing dust. Unfortunately, one of those localized channels of dust ended up over a busy Arizona interstate,” Chief Meteorologist Chris Dunn told KPHO.