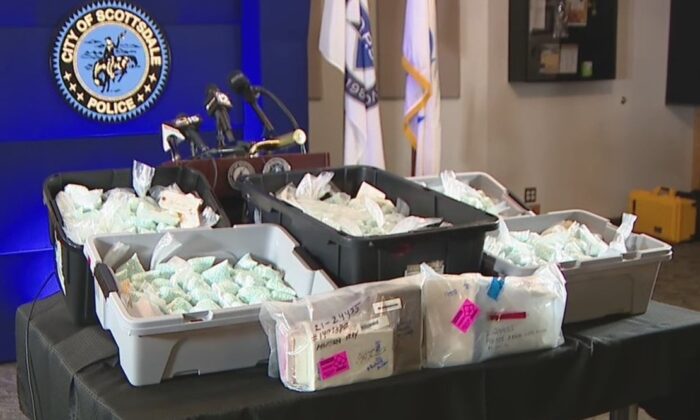 A joint federal and local drug task force seized a record 1.7 million fentanyl pills in mid-December in a sweeping crackdown on illegal drugs entering the United States from Mexico.

“As U.S. overdose deaths reach a devastating new height, claiming a new victim every five minutes, the [federal] Drug Enforcement Administration (DEA) has revealed a direct link between fentanyl-related overdose deaths and criminal drug networks in Mexico,” the DEA said in a statement.

The DEA said that these criminal networks are using social media and smartphones to market fake drugs laced with fentanyl.

On Dec. 14, 2021, the DEA, working with the Scottsdale, Arizona, Police Department and that state’s Attorney General’s Office, seized a record 1.7 million fentanyl pills. At least 10 kilograms of fentanyl powder was also confiscated in a single investigation in Arizona.

Further details about the location of the sting operation and any arrests were unavailable at press time.

The synthetic drug fentanyl is considered to be many times more potent than heroin or morphine. It’s responsible for thousands of deaths each year in the United States.

DEA Administrator Anne Milgram, speaking at a press conference on Dec. 16, said that drug cartels and traffickers from Mexico have found “the perfect tool” in social media to sell their products and “pump this poison into the U.S., and they are killing tens of thousands of Americans.”

“This is an existential threat to our communities,” Milgram said, noting that there’s enough fentanyl in the country to “kill every single American.”

Milgram said there are currently 280 million smartphone users in the United States, many of whom are duped by drug traffickers who promote fake pills as legitimate pharmaceuticals.

“This investigation is an example of what we are seeing across the country,” she added.

During the two-month public “safety surge,” the DEA’s Phoenix Field Division seized more than 3 million fentanyl pills, 45 kilograms of fentanyl powder, 35 firearms, and made over 40 arrests.

The operation took place between Sept. 29 through Dec. 14.

“The DEA surge targeted criminal drug networks that are harnessing the anonymity and accessibility of social media apps to push deadly drugs into American communities,” according to the DEA.

Border communities in southern Arizona continue to be a gateway for drugs entering the country from Mexico for eventual distribution and sale across the United States.

“They are using these platforms to flood our country with fentanyl. The ease with which drug dealers can operate on social media and other popular smartphone apps is fueling our nation’s unprecedented overdose epidemic,” Milgram said.

“This holiday season, every parent, family member, and friend should take a few minutes to share a simple message: One Pill Can Kill. Know that DEA remains relentless in our commitment to take down the criminal drug networks that threaten the safety and health of American communities.”

Since January, the DEA’s Phoenix Field Division has confiscated more than 9.5 million counterfeit pills in Arizona.

DEA officials warn that drug cartels in Mexico are “mass-producing” fentanyl, as well as fake pills that are laced with fentanyl. Chemicals used in the drug’s production are largely imported from China.

The fake prescription pills are designed to appear the same as legitimate trademarked prescriptions, such as Oxycontin, Percocet, Vicodin, Adderall, Xanax, and other regulated medicines. They have been found in every state in the country, the DEA said.

In September of 2021, the DEA issued a Public Safety Alert to warn people about the “alarming increase” of fake prescription pills.

In response, the DEA launched the One Pill Can Kill public relations campaign to inform people of the dangers associated with fake prescription pills and fentanyl.

Arizona state Rep. Mark Finchem, a Republican, said the ease with which fentanyl and other drugs enter the country illustrates a border policy failure of the current administration.

“Had this poison not been intercepted, it no doubt would’ve been responsible for many deaths in our community and around the country. The fact that this poison made it so far into the state of Arizona and was not interdicted at the border is a direct effect of the failed Biden border policy,” Finchem told The Epoch Times.