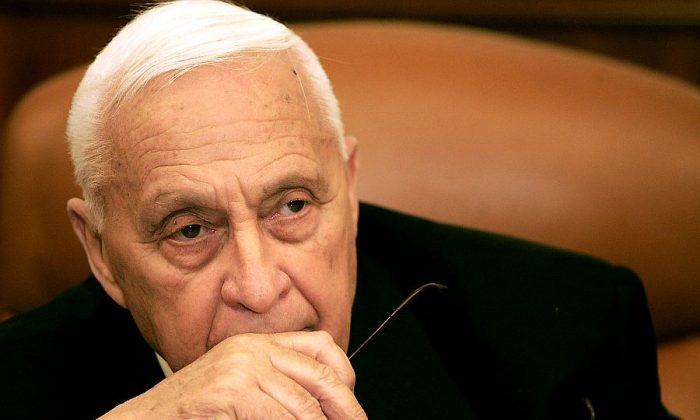 People around the world have passed judgment about the life of Israel’s most controversial leader. It runs the gamut from, on one end, utter and deep admiration for his uncompromising devotion to Israel’s security and wellbeing on one hand to, on the other end (especially the Palestinians’ end), reviling him for being cruel, morally corrupt, and a war criminal.

I doubt that history will render a judgment that supports with no reservation one or the other characterization of this unique individual. As for me, he was a leader’s leader who demonstrated vision, courage, and commitment to what he believed in—qualities that are sorely lacking on the global stage today and especially in the Middle East.

Yes, on a number of occasions he demonstrated poor judgment that caused great grief and losses to many Palestinians. I can say, however, with no reservation that he had no malice in his heart but that his overzealousness obscured, at times, his better judgment about what was right or what was wrong.

Perhaps the best way to survey Sharon’s life is to look as his unique characteristics and the imprint he left behind, which will have a lasting impact for generations to come.

Visionary: He was a hard-core ideologue who believed in Israel’s right to occupy all of the land between the Mediterranean and the Jordan River. But when he concluded in 2004 that the only way to preserve Israel as a democracy and its Jewish national identity was to take a certain path, he acted and withdrew all Israeli settlers and military personnel from Gaza with the intention of withdrawing from much of the West Bank.

Leadership: Sharon exuded unmatched leadership qualities both as a soldier and as a political leader. When he was required to fight as a soldier he stood in the forefront and was never fazed by any danger. As a politician, he never hesitated to make the most sensitive political decisions to change course and seek a two-state solution, overriding the objections of many in his Cabinet including Netanyahu who served as his finance minister at the time.

Courageous: Sharon’s courage was exemplary in leading his troops or his government—he always stuck to the motto that a commitment to achieve anything requires corresponding courage, especially when it appears that all odds are against you.

Once he decided to bulldoze ahead with his plan to evacuate Gaza, he never feared the threats to his life from extremist settlers, especially when the assassination of Yitzhak Rabin was still fresh in the mind of the Israelis.

Statesman: Sharon, who suffered several failures, understood that true statesmanship is not only a product of successive successes but also the lessons learned from failures. Realizing that occupation is not sustainable, Sharon had few compunctions to propose a final peace agreement with the Palestinians.

Brilliant Military Strategist: Sharon was the soldier’s soldier and demonstrated from his early career that he was a superb military strategist. He will be remembered in the military annals as one of the greatest. In the 1973 war against Egypt, after Israel’s initial retreat he commanded 27,000 Israelis in a drive across Egypt’s Suez Canal that helped turn the tide of the war, and was poised to crush the Egyptian Third Army had he not been prevented by the United States.

Relentless: Sharon’s deep convictions about what was best for Israel made him one of the most relentless leaders who never succumbed to failure or circumstances. He was a warrior both in his military and political life. He pursued his goals with zeal by chasing terrorists across enemy lines or changing political course when his party did not go along with him to seek rapprochement with the Palestinians.

Deep ideologue: Sharon was an uncompromising ideologue; not only did he believe that the Jews have every right to reside in their ancient homeland, he also openly advocated grabbing every inch of Palestinian land to realize the Jews’ historic right. He came to be known as the father of the settlements and the architect of building a barrier of fences and walls to separate Israel from the West Bank.

Pragmatist: Former Israeli Prime Minister Olmert, who served as Sharon’s deputy, put it best when he said “He [Sharon] was a smart and realistic person and understood well that there is a limit in our ability to conduct wars.” Sharon believed that a practical, realizable solution must be found regardless of Israel’s military prowess.

Focused: Sharon’s many setbacks did not sway him from his ultimate goal to serve his beloved country in any way possible. After his setback in the 1982 Lebanon War he began a process of self-rehabilitation, serving in parliament and in a number of Cabinet posts while endearing himself in the eyes of the settlers. He ended this period by achieving a landslide victory in 2001, which bestowed on him the premiership.

Dismissive: In many ways, Sharon was dismissive of his opponents, especially when he was convinced of the correctness of his moves. In late 2003, he unveiled his “unilateral disengagement” regardless of what his political opponents had to say and without prior consultation and an agreement with the Palestinians.

Bold: Probably the best way to describe Sharon’s excessive confidence and his boldness is his engineering of the invasion of Lebanon in 1982 while portraying it as a limited campaign to rout Palestinian terrorists infiltrating from Southern Lebanon. Sharon reached the outskirts of Beirut, which was seen by many Israelis as a bold and daring military move that could lead, as Sharon envisioned, to the establishment of a pro-Israel regime in Lebanon. This military adventure, however, ended up in a major debacle that kept Israeli forces in Lebanon for 18 years and most likely precipitated the rise of Hezbollah.

Defiant: Sharon’s defiance may be described by his provocative visit to the Temple Mount, or Haram al-Sharif, the third-holiest site in Islam. This incident was followed by Palestinian riots that escalated into a full-fledged uprising. Whether or not the Palestinians had planned this in advance, the visit provided the impetus. This second Intifada (uprising) claimed the lives of more than 3,000 Palestinians and 1,000 Israelis, and laid much of the West Bank in ruin.

Sharon’s death in my view leaves a legacy that the Israelis and the Palestinians would do well to remember: Israeli–Palestinian coexistence is a fact of life, and time and circumstances will change little other than to inflict more pain and suffering, and further deepen the hatred and animosity that will continue to poison one generation after another.

Sharon came to this realization and made a historic turn. He had the vision, courage, leadership, and wisdom to act.

It is a historic irony that the two leaders who reached out to the Palestinians, Rabin and Sharon, who both took concrete steps for peace, were struck down before they could accomplish their goals. True leaders must fear no death, because the future of their people and their destiny demands and deserves the highest sacrifices.

Dr. Alon Ben-Meir is a professor of international relations at the Center for Global Affairs at NYU. He teaches courses on international negotiation and Middle Eastern studies.