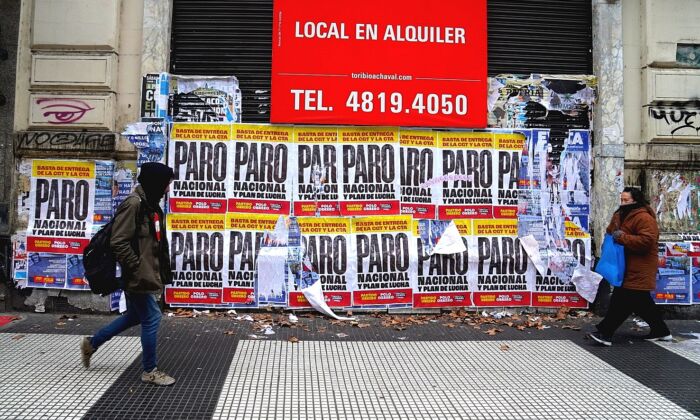 The cacophony has become the city’s background noise in recent months, with a string of massive demonstrations protesting the government cutting the nation’s generous subsidy programs.

Amid the country’s soaring inflation and poverty come the persistent threats from demonstration organizers—known locally as piqueteros—to shut down businesses and roads until the government relents and increases welfare subsidies.

Protesters stood outside government offices on Aug. 4 in the frigid winter air brandishing signs with slogans such as, “public policies for everyone” and “social equality.”

Calls for more food supplements and relief from the country’s soaring inflation, which has officially hit 64 percent, are frequently heard in the streets.

Socialist union groups shut down the city’s widest avenue on Aug. 7 for six hours as part of a demonstration to show support for Vice President Cristina Kirchner, an avid supporter of the country’s social benefits programs.

Indicted for fraud in 2016, Kirchner is currently on trial for “unfaithful administration” and colluding with Argentina’s central bank to sell billions in currency futures at below-market rates back in 2015.

Her trial exemplifies what lies at the heart of Argentina’s crisis: corruption and money management issues.

Runaway government spending, money printing, and a growing inability to generate revenue have ravaged the once prosperous nation. And many locals put the blame squarely on the shoulders of Fernández’s administration.

“Everything in Argentina is starting to break,” economic analyst and online show host Chris told The Epoch Times.

Because of concerns of potential government blacklisting for speaking to foreign media outlets about the country’s crisis, Chris requested to have just his first name printed.

He’s a Buenos Aires resident and an advocate for change within the nation’s crumbling economy. The economist and activist said Argentina’s inflation can be traced to a primary source.

“The government keeps spending more than it makes,” he said.

Officials point to the COVID-19 pandemic and Russia’s war in Ukraine as the primary drives behind the recent inflation spike. However, Chris notes that some neighboring countries—such as Bolivia and Uruguay—aren’t taking the same hit as Argentina.

“If you see the Boliviano from 2019, it’s still worth the same amount. Same with the Uruguayan peso. But not in Argentina, the economics weren’t the same,” he said.

On the evening of Aug. 3, the new Argentinian minister of the economy, Sergio Massa, announced his plan for economic recovery.

“We have an enormous challenge ahead of us, but also an enormous opportunity to transform the reality in which we live,” he said,

However, some locals are shaking their heads and feel like Massa’s verve is too little, too late.

“We were not ready for this,” Lucilla Martinez told The Epoch Times.

Martinez works in the hospitality industry in the historic Buenos Aires neighborhood of Monserrat. She said many career fields in Argentina are backed by unions that offer specific benefits, which comes in handy as inflation continues to climb.

One of these is a salary increase to help offset the effects of the plummeting peso rate.

Like Chris, Martinez believes her country’s economic woes are tethered directly to the poor spending habits of politicians. But she also believes that easy access and overuse of the nation’s subsidy programs haven’t helped.

“What the government is offering in subsidies was too good, and people just took advantage for years,” she said.

On the other side of town is Albertina Perez, a public transit driver who dreams of retiring in the next couple of years. However, she doubts it will be possible to do so now, saying that the country’s extreme inflation makes it difficult for most middle-class earners to plan for the future.

“The situation [here] is a disaster. Everybody in the world knows it,” Perez told The Epoch Times.

Argentina’s transportation minister raised metro fares by 40 percent in Buenos Aires on Aug. 1, further stoking the rage of cash-strapped locals. Public transit rates had held steady in the capital for the past three years, despite fluctuating inflation throughout the pandemic.

For people such as Perez, overreaching state benefits programs are a thorn in the sides of many Argentinians.

“The planeros [welfare recipients] think all their money comes from the government, but it comes from people who work. I’m paying for those people to sit at home and not work,” she said.

Walking down Florida Street in the city center, it’s not unusual to hear locals whisper “dollars” at those passing by.

It’s the verbal calling card for black market dollars, a thriving industry in Argentina that residents use to buffer their savings and income against the free-falling Argentinian peso.

Presently, there are 11 different exchange rates for the U.S. dollar in Argentina, only one of which is considered the official government rate.

The state and international exchange for the Argentine peso was 133 for US$1 on Aug. 7. This represents a two-point drop from Aug. 4, when the official exchange was at 131 pesos for US$1.

But locals don’t bother with the devalued official rate.

Instead, savvy Argentinians will trade up to 290 pesos for US$1 in the black market, which can be found everywhere throughout the country. People trade pesos for dollars at the higher, unofficial rate out of their homes, storefronts, restaurants, or even their pockets every chance they get.

The Argentinian government calls these “illegal dollars,” but it’s popularly known as the “blue dollar” rate.

“The government is printing money, which is a problem because no one wants pesos. Everyone here wants dollars,” Chris said.

In July 2021, Argentina’s central bank printed 180 billion pesos ahead of the country’s November midterm elections. Lacking access to foreign credit because of payment defaults, Fernández’s administration fell back on money printing to finance social spending during the pandemic.

As part of his new plan, Massa has pledged to halt money printing as part of the country’s new economic strategy to stem inflation.

Nevertheless, locals aren’t wasting any time snatching up U.S. dollars where they can because they’ve been in this situation before.

Between 1989 and 1990, Argentina saw inflation hit a record 2,600 percent, during which time, the national banking system “practically disappeared,” according to the International Monetary Fund (IMF).

And many locals fear the country is barreling toward a similar disaster.

“All the analysts are saying the same thing. We’ll hit 80 to 90 percent inflation this year,” Chris said.

Because of the soaring demand for U.S. dollars and a superior exchange rate on the black market, the government has enacted protocols in an attempt to limit the number of dollars Argentinians can buy per month.

Chris said residents are allowed to legally buy US$200 dollars per month, which the government tries to track through credit card spending. On the streets, police are attempting to crack down on the street money changers.

Despite this, locals know that buying dollars can be as simple as heading to the grocery store or making a phone call.

Telegram and What’s App groups are popular ways for locals to buy dollars. After a brief exchange, a delivery driver will bring the amount you wish to buy in dollars to your home.

It’s as easy as ordering take-out.

Juan Hernandez is a former port worker and hobby artist that sells homemade jewelry in Monserrat. He’s also among the majority of residents looking to buffer his income with U.S. dollars.

Opening his wallet to withdraw a bright orange 1,000 peso note, he used it to illustrate the importance of having U.S. dollars in Argentina.

Hernandez said the government is “screwing up everything” in his country. And while he’s proud to be an Argentinian, he also said he may travel abroad to a neighboring country to find relief from his country’s crippling inflation.

Soaring inflation sparked widespread protests throughout the country before the government cut to subsidies began in June. This is because social benefits for wages were enough to get by before.

Yet now that prices for commodities are changing and going up daily, even by the hour in some stores, people depending on welfare subsidies can no longer live on social benefits alone.

Some price-controlled food items, such as pasta, have begun to run out on the shelves.

Soaring food prices come at a time when an estimated 40 percent of the country lives in poverty.

Roughly 2,800 people slip below that line every day, according to data from the National Institute of Statistics and Census.

Perez said, “I love my country, but we have many problems to fix here.”