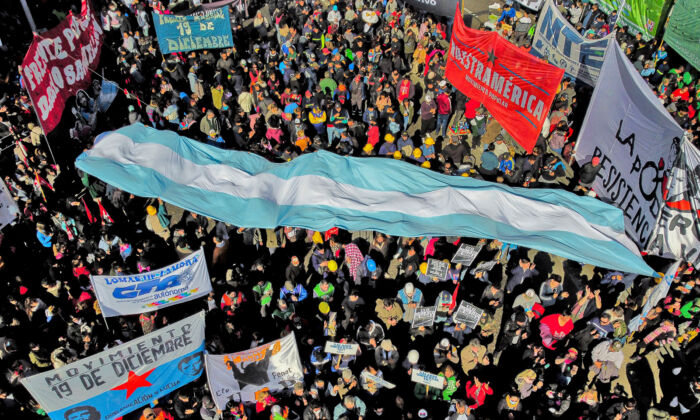 Members of social and trade union organizations protesting on July 20, 2022, in Buenos Aires, in demand of a universal basic income. The impoverished South American country struggles to repay its US$44 billion dollar debt with the International Monetary Fund (IMF) amid rampant inflation and social unrest. (Luis Robayo/AFP via Getty Images)
Americas

Only 43 percent of adults have a job, as inflation soars above 60 percent
By Autumn Spredemann

Protests have erupted in Buenos Aires, Argentina, over the past 90 days and continue to build inside the capital as residents battle with their center-left government over sizable amendments to social programs.

Cuts to subsidies in the energy sector based on household income began in June. Other subsidies, including the country’s welfare program, are also on the chopping block, triggering thousands of angry residents to take to the streets.

State-sponsored aid for civilians has soared over the past 20 years, leaving 22 million Argentinians dependent on some form of government assistance.

In the first quarter of 2022, the national employment rate was 43 percent, according to government figures.

The country’s state-funded programs extend to nearly every aspect of the economy, from wages to utilities, education, and health care.

Argentina already spends an estimated 800 million pesos per day—a sum of more than $6 million—on state benefit programs. Concurrently, inflation in the South American nation hit 58 percent in May and soared above 60 percent in July. By comparison, national inflation was just over 14 percent in 2015.

Harry Lorenzo, chief financial officer of Income Based Research, told The Epoch Times the spending habits of Argentina’s government are at the root of the escalating problem.

“The Argentine government has been grappling with a collapsing economy for some time now. The main reason for this is the government’s unsustainable spending, which has been funded in part by generous welfare programs,” he said.

Cries for more state money, freedom from the International Monetary Fund (IMF), and for President Alberto Fernández to step down echoed within the angry crowds gathered near the president’s office—Casa Rosada—during the nation’s Independence Day celebration on July 9.

Since then, scheduled demonstrations have continued, led by professional protest organizers, or “piqueteros,” demanding the abolition of the proposed subsidy cuts and a wage increase.

“This is madness. What the piqueteros are asking for is madness,” Alvaro Gomez told The Epoch Times. Gomez, who is a taxi driver, has lived and worked in Buenos Aires for more than 15 years. As the years have passed, he’s watched his country slide deeper into economic chaos.

“I’ve seen five presidents come and go in that time; nothing has improved,” he said. “Half of our country doesn’t want a job, and the ones that do, don’t want to pay the taxes for the others.”

Argentina’s economy minister and close Fernández ally Martín Guzmán resigned from office on July 2, amid complaints that internal conflicts prevented him from doing his job.

Kirchner is a vehement supporter of subsidies and has previously denounced Argentina’s dependence on the IMF.

In summary, half of the ruling coalition wants more foreign bailouts as a solution to bankrupted coffers and inflation, while the other half wants to maintain existing social programs and be independent of foreign aid while raising taxes on an increasingly impoverished population.

Presently, some parts of Argentina have more than 40 percent of its population living below the poverty line.

Kirchner called Guzmán’s sudden resignation “an immense act of political irresponsibility” during a press conference in the province of Santa Cruz.

Fernández quickly appointed Silvina Batakis on July 3 to fill the gap in the pivotal office.

“While this has been somewhat successful, it has not solved the underlying problem,” Donnelly said.

He explained that Fernández’s administration could do several things to alleviate the country’s dependence on outside loans, such as increasing exports and attracting more foreign investment.

However, with the collapse of the peso, high inflation, and no clear strategy for a path forward from the government, outside investor confidence remains very low.

Lorenzo maintains that reeling in government spending is paramount.

“This would involve scaling back the welfare programs, which have been a major contributor to the country’s debt.”

However, for the 1.2 million members dependent on the social program Empower Work, which is an income subsidy that provides a living wage for an indefinite period of time, working a regular job is out of the question.

“The government expects us to work from 8 a.m. to 5 p.m. for the same amount of money,” an outraged female Buenos Aires resident and piquetero lamented to reporters during a live news broadcast.

When asked where how she’d been earning income for her household, the woman replied, “the government.”

Anger at Having to Work

Another protester, an adult male, also decried the proposed welfare program changes telling local reporters, “Cristina [Kirchner] told us we have to go to work instead of receiving social benefits. Going to work, that’s the policy of a right-winger.”

Protesters continue to ask for more subsidy money or for Fernández to step down from office.

Meanwhile, the embattled head of state called for unity in the economically devastated nation during the 206th anniversary of the country’s independence. In the same speech, Fernández lashed out at groups who were attacking the government and wanted to “keep all the income.”

Regarding the nation’s deepening economic crisis and resulting instability, Fernández said: “Unity is always the fruit of the willingness of those involved to consolidate it.

“History teaches us that it’s a value that we must preserve in the most difficult moments.”