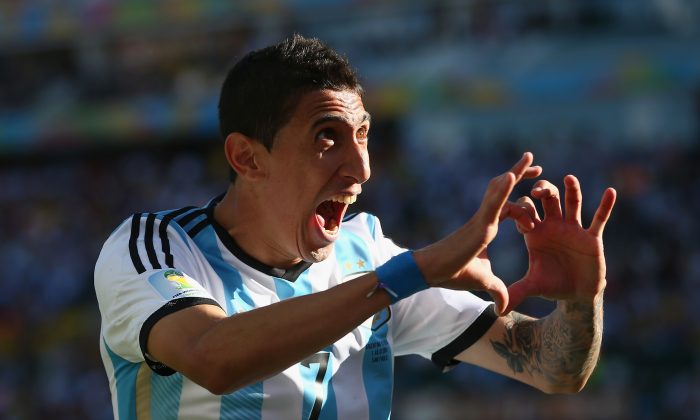 Argentina goalkeeper Sergio Romero made a save in the 28th minute.

Diego Benaglio pulled off a crucial save in the 77th minute to deny Lionel Messi.

Check out his other highlights here.

SAO PAULO (AP) — Angel Di Maria scored in the 118th minute Tuesday to give Argentina a 1-0 win over Switzerland after extra time and a spot in the World Cup quarterfinals.

With a penalty shootout looming, Lionel Messi made a surging run toward the Swiss area and laid the ball off to Di Maria on the right, and the winger sent a left-foot shot past diving goalkeeper Diego Benaglio.

Blerim Dzemaili nearly equalized right before the end but his header hit the post, and the rebound bounced off his knee and wide of the goal.

Argentina will play the winner of Belgium and the United States.

It was a dramatic ending to what had been a tight match, with Argentina struggling to break through Switzerland’s disciplined defense.

Though Argentina dominated possession from the start, it was Switzerland that had the best chances in the slow-paced first half. Xherdan Shaqiri cut in from the left in the 28th and found Granit Xhaka in the middle of the penalty area, but Sergio Romero stopped Xhaka’s shot with his left foot.

Alone with Romero, striker Josip Drmic wasted a chance to score 10 minutes later with a botched attempt to chip over the Argentina goalkeeper.

Argentina’s attack improved after the break when fullback Marcos Rojo launched raids down the left flank, feeding crosses to the Argentine attackers.

Just after the half-hour mark Gonzalo Higuian finally got an attempt on target as he connected with Rojo’s cross, forcing Benaglio to a fingertip save.

In the 78th, Messi tested Benaglio again as he dribbled into the area and struck a low shot that the Swiss goalkeeper stopped at his right post.

Benaglio kept Switzerland in the game when got a hand on Di Maria’s shot in 109th minute, but had no chance on the Argentina player’s winner.