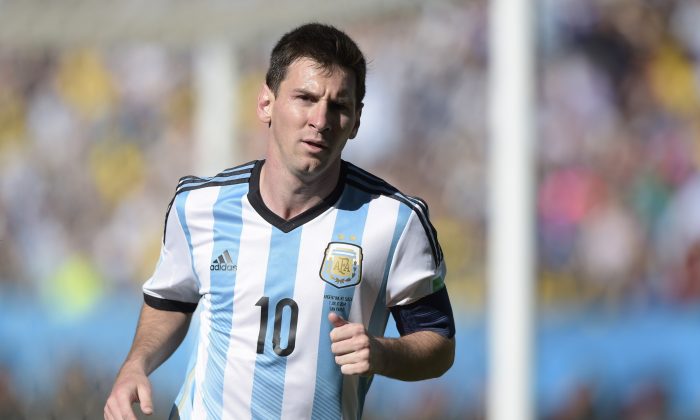 Argentina's forward and captain Lionel Messi is pictured during a Round of 16 football match between Argentina and Switzerland at Corinthians Arena in Sao Paulo during the 2014 FIFA World Cup on July 1, 2014. (JUAN MABROMATA/AFP/Getty Images)
Soccer

Argentina will take on Belgium in a World Cup 2014 quarter final match.

Argentina and Belgium have not convinced at all in the World Cup so far.

La Albiceleste required the prodigious skills of Lionel Messi to see them through the group stage. Messi scored in all group stage games, and twice at the very end of games.

In the round of 16 game against Switzerland, Argentina looked almost ordinary, despite having several world class soccer stars in their side. Once again, Messi bailed Argentina out, making a good pass to assist Angel di Maria’s match winner.

Belgium too failed to impress against supposedly weaker teams. Although Belgium have the likes of Eden Hazard, Romelu Lukaku, and Adnan Januzaj, the tournament dark horses struggled to find goals against Algeria, Greece, and South Korea.

The Red Devils managed to find some sort of coherence against the United States in the second round match, but were stopped by an outstanding Tim Howard for 90 minutes. Although Belgium found the net twice in extra time, it was only after the USMNT simply ran out of steam, and still the Americans came close to mounting a comeback via a Julian Green goal.

If Argentina are to beat Belgium in the quarter final, the other footballing stars on the team — Ezequiel Lavezzi, Sergio Aguero (if he is fit), Gonzalo Higuain, and Angel di Maria — have to step up their game a few notches, and get on the score sheet.

On the formation front, coach Alejandro Sabella needs to start finding solutions. His 5-3-2/3-5-2 system didn’t work out in the group stage, and while swapping to 4-3-3 has restored some balance to the side, results have not been totally convincing.

Of course, if Messi works some of his magic again, all problems are postponed, and Argentina are through to the semi final.

For Belgium, things are much trickier. Tactics wise, coach Marc Wilmots has been very smart and lucky with his substitutions thus far in the tournament, as almost all of them managed to bag goals. Wilmots should keep up his squad rotation and hope it works against Argentina.

However, Wilmots needs to find a way to make the most of his star players, particularly Eden Hazard, if Belgium are to prevail.

Prediction: Argentina and Belgium play out a 0-0 draw, and Argentina wins 5-4 on penalties.

Here is how the sides might possibly line up.