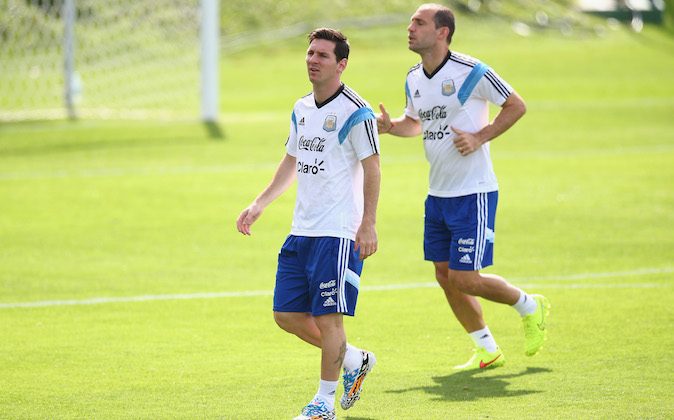 Lionel Messi of Argentina during a training session at Cidade do Galo on June 18, 2014 in Vespasiano, Brazil. (Ronald Martinez/Getty Images)
Soccer

Argentina and Iran will face off on Saturday, June 21, in a World Cup 2014 Group F match.

Live stream is available on Watch ESPN and ITV Player.

BELO HORIZONTE, Brazil (AP) — After stuttering in the early stages of in its opening match, Argentina’s attack will need to use all its talent to find a way to break through Iran’s stubborn defense in its second Group F game.

Whatever formation Argentina uses against Iran on Saturday, the South Americans will need to be patient against a lineup that held Nigeria to a 0-0 draw in its first match.

“All of the matches have their difficulties and it’s our job to overcome them,” backup goalkeeper Agustin Orion said.

Messi said Argentina made too many mistakes against Bosnia-Herzegovina despite winning 2-1, starting the match with two attackers instead of three and playing a 5-3-2 formation in the first half. Messi prefers a 4-3-3 and Argentine media reports said he and other players insisted at halftime that Sabella needed to change tactics. The coach made the change and speculation emerged there was a growing rift between Messi and Sabella.

But other players sought to downplay any serious disagreement between the pair.

“Messi gave his opinion, which he is entitled to, and you shouldn’t go looking for things that aren’t there,” said Mariano Andujar, another backup ‘keeper.

A win for Argentina against Iran will give the South Americans a firm grip on Group H, but Iran’s defense is a potential impediment.

Iran coach Carlos Queiroz wasn’t happy with his team being labelled as defensive, saying the result against Nigeria was a fair reflection of the game. He also said his players deserved “sympathy and respect” for performing on the biggest stage despite the impact of economic sanctions on the country — which made it difficult to arrange friendlies.

Queiroz said his Iranian squad was primed to face Argentina at Mineirao Stadium in Belo Horizonte.

“Our match with Argentina will be the most important and biggest match in Iran’s football history,” he said. “I still believe the majority assume there are only three teams in Group F, with the experts believing that Argentina is the top team in this group, while either Nigeria, or Bosnia ranking 2nd. Of course they are right about Argentina.”

Queiroz didn’t reveal whether his team would resort to the same tactics to contain players like Messi, Sergio Aguero and Gonzalo Higuain.

“We consider it as the greatest challenge before us,” he said. “We will try to display a challenging spirit.”