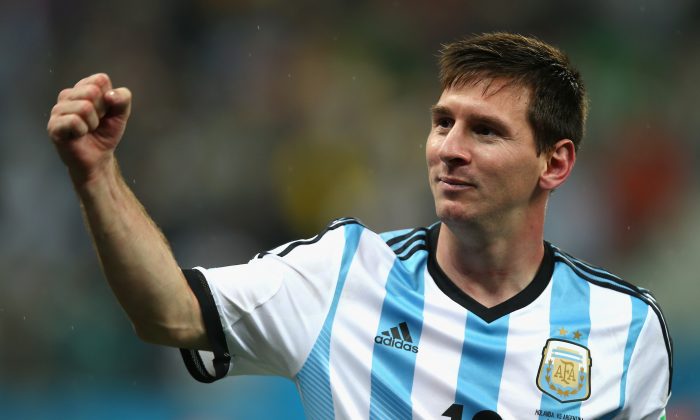 Lionel Messi of Argentina celebrates defeating the Netherlands in a shootout during the 2014 FIFA World Cup Brazil Semi Final match between the Netherlands and Argentina at Arena de Sao Paulo on July 9, 2014 in Sao Paulo, Brazil. (Photo by Clive Rose/Getty Images)
Special

Germany and Argentina are set to clash in the World Cup 2014 final on Sunday, July 13.

The game will be played in Estádio Maracanã, Rio de Janeiro, at 3:00 p.m. EDT.

After their 7-1 demolition of hosts Brazil in the semi final, Germany will certainly be brimming with confidence now.

Rather than simply being stereotypically “ruthless” and “efficient” in the competition so far, the Germans have really found success with balance. Die Mannschaft play a smooth, simple passing game tempered by pragmatism rather than passing for passing sake like the Spanish tiki-taka, death-by-football game.

When they need to, the German players are also able to launch lightning-fast counter attacks, instigated once their defensive high pressing game wins them possession.

One decision coach Joachim Loew made in recent games that made Germany more dangerous going forward is the shifting of captain Philipp Lahm from a holding midfield role to his usual right back role, and playing Toni Kroos, Bastian Schweinsteiger, and Sami Khedira in a three-man midfield. Kross and Schweisteiger provide the passing that make the German side work, while Khedira has impressed with his box-to-box running and combinations.

Germany should stick with this tried-and-tested formula from the quarter final and semi final in the championship game.

Argentina, on the other hand, has been rather enigmatic in the competition.

There is very little potency in the Argentine attack, save Lionel Messi. The Barcelona super star had to drag his team forward/bail them out for most of the competition with his often solitary goals or assists.

With Angel di Maria possibly out of the final with an injury, Ezequiel Lavezzi turning up the pace but not making much head way in terms of scoring, and with Gonzalo Higuain still not making the most of his chances, Argentina will have to hope Messi shows up in the final if they are to win.

The one bright spark of this Argentinian team is their defense. The back line have kept four clean sheets so far, a rather impressive statistic for a team that is not known for defending. Javier Mascherano has been a rock in his defensive midfield row, and almost certainly ensured Argentina’s progression to the final with his last ditch tackle on Arjen Robben in the dying minutes of the semi final match.

Coach Alejandro Sabella has endured some criticism about his tactics, but if Argentina remains defensively solid, and if Messi provides that one spark of magic, La Albiceleste will be headed for a very famous third World Cup victory at the historic Maracana stadium.

Prediction: Argentina to win 1-0, courtesy of a Lionel Messi strike.

Germany are 11/8 to lift the trophey, according to most bookmakers, and Argentina are 5/2. Odds for a draw is 23/10, according to OddsChecker.

Here are the possible lineups.

SAO PAULO (AP) — The World Cup can only hope that Lionel Messi is leaving his best for last.

In the most important World Cup match to date in his epoch-shaping career, football’s superstar was neither super nor a star. The four-time world player of the year was a bystander, not a decisive protagonist, for large chunks of Wednesday’s semifinal, his first on football’s biggest stage.

The match dragged on into extra time and then still finished 0-0 in large part because Messi failed to leave his mark on it as he has done on hundreds of others for Barcelona, his club, but not for Argentina, his country that needs him now to step up.

Frankly disappointing. In the penalty shoot-out, Messi did score the all-important nerve-steadying first goal that his teammates then built on, heaping intolerable pressure on the Netherlands after its first shooter, Ron Vlaar, saw his effort saved. But Messi’s contribution to Argentina’s win pretty much started and stopped there. His thousands of fans in the Sao Paulo crowd chanted “Ole, ole, ole, Messi, Messi!” But he didn’t really do anything to deserve it.

Bottom line: Messi needs to be spectacular in the final against Germany on Sunday if he is to put his stamp on World Cup history like Diego Maradona.

Pub debates about who was/is a better footballer — Messi, Maradona or Pele — are always entertaining but ultimately can’t be answered, because these judgments are very much a personal thing, because the three of them played in different eras and because their careers took different arcs.

Still, at this stage of the 1986 World Cup, Maradona was pretty much winning the thing single-handed. Captain of Argentina, just like Messi, Maradona scored both goals against Belgium in the semifinal, carrying the team to the final where it beat West Germany, 3-2.

Maradona also scored both Argentine goals that eliminated England in the quarterfinals. The first was the infamous “Hand of God” punched in with his raised fist; the second was a gem after a sublime dribble past five England players.

Messi, on the other hand, hasn’t scored since the group stage here in Brazil. He scored in Argentina’s win against Bosnia in its opening match and made a splash with a fabulous injury-time winner against Iran. He also got Argentina’s first two goals in a 3-2 victory against Nigeria.

Since then, zilch. Just an assist for Angel Di Maria’s winning goal against Switzerland in the first knockout game. It doesn’t add up to enough to put Messi on a higher pedestal than Maradona. We can have this conversation again if he scores the goals that beat Germany in the final.

Nigel De Jong can claim much of the credit for keeping Messi out of the action under damp, dark skies in Wednesday’s semifinal that felt flat compared to the previous day’s fireworks of Germany destroying Brazil 7-1.

De Jong glued himself to Messi so closely that when he shuts his eyes for days to come, he’ll no doubt still be able to picture the face of the Netherlands midfielder and the feeling of him breathing down his neck.

In the first half, Messi did fire a free-kick hard and flat past the Dutch wall into the arms of goalkeeper Jasper Cillessen. In the second half, Messi wasted a free-kick by hoofing it harmlessly long.

The Netherlands allowed Messi no time on the ball and tackled him en masse when he had it. Jordy Clasie took over as Messi’s handcuffs when De Jong tired and was taken off after an hour. After 105 minutes, data crunchers Opta noted that Messi still hadn’t touched the ball once inside the Dutch penalty area.

Still, the Netherlands’ suffocation of Messi couldn’t alone explain his failure to make an impact. Of all the Argentine players who stayed on the pitch for the entire 120 minutes, Messi covered the least ground. He strolled a lot of the time, fiddling with his captain’s arm band, using his shirt to wipe his nose and watching play happen around, not through, him.

Perhaps the hope was that the Netherlands would eventually forget about him, giving him breathing space to exploit. If so, the tactic didn’t work. In the second period of extra time, Messi did come alive for a brief instant, sprinting with the ball at his feet and riding tackles to then cut back a cross for Maxi Rodriguez. But Rodriguez’s right-footed volley had neither the power nor accuracy to trouble Cillessen.

Messi’s European and Spanish trophies with Barcelona and his world player of the year awards are enough, already, to make him one of football’s greats. But to be considered a World Cup great, worthy of mention with Maradona and Pele, he also needs a signature moment in a big game in Brazil.

He has one last chance to do it.