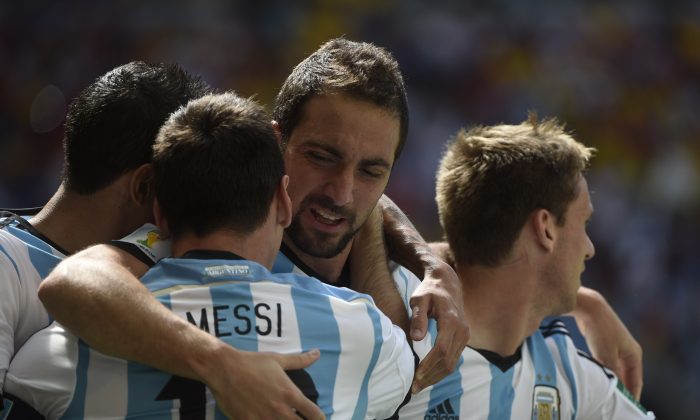 Argentina's forward Gonzalo Higuain (C) celebrates with teammates after scoring during a quarter-final football match between Argentina and Belgium at the Mane Garrincha National Stadium in Brasilia during the 2014 FIFA World Cup on July 5, 2014. (MARTIN BUREAU/AFP/Getty Images)
Soccer

Argentina defeat Belgium 1-0 and move on to the semi finals of the World Cup 2014.

Gonzalo Higuain scored in the 8th minute for Argentina. This is the first time a Argentine forward who is not Lionel Messi is on the score sheet in this World Cup.

In the 55th minute of the Argentina vs Belgium match, Argentina coach Sabella almost fell on his back after watching Higuain hit the bar.

BRASILIA, Brazil (AP) — Gonzalo Higuain’s first goal of this World Cup sent Argentina into the semifinals on Saturday with a 1-0 win over a disappointing Belgium.

Argentina, which hadn’t advanced past the World Cup quarterfinals since 1990, controlled the match after Higuain’s eighth minute goal, more due to disciplined defending than sparkling attack.

The Napoli striker fired home Angel Di Maria’s deflected pass just inside the area, beating Belgium goalkeeper Thibaut Courtois with a low shot to the far corner of the goal as he turned.

“Since the first game of this World Cup I said I was calm, that the goals would come. It came and at an important moment,” Higuain said. “It’s been so many years since we made it to the semifinals. Now we did.”

Higuain came close to making it 2-0 in the second half when his shot smashed into the crossbar. Lionel Messi missed a chance to score his fifth goal of the tournament when he failed to beat Courtois on a counterattack.

Belgium lacked the creativity to find a way past Argentina’s disciplined defense, and created few clear chances apart from a pair of headers by Kevin Mirallas and Marouane Fellaini.

Belgium’s most creative player, Eden Hazard, had little impact on the game beyond receiving a yellow card for a studs-first challenge on Lucas Biglia. Hazard cut a disconsolate figure as he was substiuted by Nacer Chadli in the 75th.

Argentina’s next opponent will be the winner of the last quarterfinal between the Netherlands and Costa Rica, who were playing later Saturday in Salvador.

Long after the game, thousands of Argentine fans flocked to one section of the Estadio Nacional to celebrate the team’s best World Cup performance in 24 years.

Argentina was knocked out in the quarterfinals in the previous two World Cups, both times by Germany. The last time it reached the semifinals was in Italy 1990, when Diego Maradona led the team to the final, which it lost 1-0 to West Germany.

Argentina has won every match in Brazil with a single goal. But unlike in previous games, the Albiceleste put in a solid performance over 90 minutes in Brasilia, frustrating the Belgians with a near-flawless defense, bolstered by strong performances from central midfielders Javier Mascherano and Lucas Biglia.

The team looked in control even after Di Maria — the team’s most influential player in Brazil aside from Messi — was substituted by Enzo Perez in the 33rd minute. The winger had appeared to hurt his right leg while shooting five minutes earlier.

Argentina took the lead when Di Maria, picking up a pass from Messi, cut in from the right and tried to find fullback Pablo Zabaleta, but his pass bounced off Jan Vertonghen into Higuain’s path.

The Napoli striker avenged himself for a string of mediocre performances in Brazil and was Argentina’s best player before being substituted by Fernando Gago in the 81st.

“Higuain has the class to put the ball where he wants it. There is nothing we could do about it,” Courtois said about the goal.

Startled by the early goal, the Red Devils didn’t cause any danger in Argentina’s penalty area until the 42nd minute when Kevin Mirallas headed Vertonghen’s cross just wide of Sergio Romero’s right post.

Meanwhile Argentina looked dangerous on the counterattack, with Higuain cutting up the Belgian defense with runs down the center.

Fifteen minutes after the break, Vertonghen once again sent a precise cross from the left flank but Fellani headed it over the crossbar.

Despite the loss, Belgium coach Marc Wilmots said he was not impressed by the Argentines, calling them “just an ordinary team.”

“I think if we had equalized in the last few minutes, they are dead, they are finished,” Wilmots said.