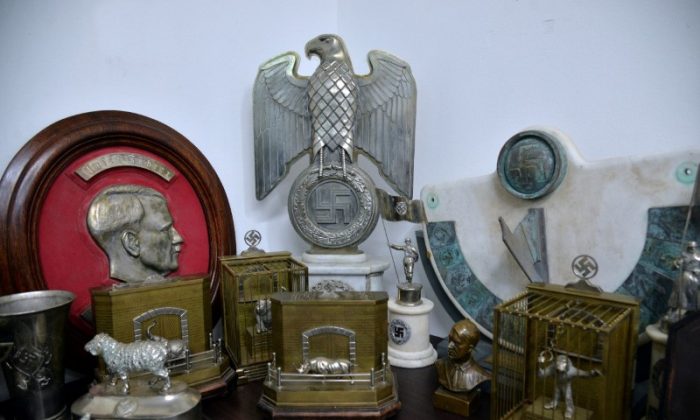 Nazi artifacts seized in the house of an art collector are displayed in Buenos Aires, in this undated handout released on June 20, 2017. (Courtesy of the Argentine Ministry of Security/Handout via Reuters)
International

BUENOS AIRES—Argentine police have seized a cache of Nazi artifacts hidden behind a library in the house of an art collector in Buenos Aires, including a bust of dictator Adolf Hitler and instruments used as racial classification tools.

The artifacts will be donated to the city’s museum dedicated to remembering the Holocaust, said Security Minister Patricia Bullrich on Monday at a press conference.

“We were very moved that this many Nazi objects were in Argentina,” said Bullrich. “We are happy to be able to say that they are no longer circulating through sales or among collectors.”

Police and Interpol said they discovered the hidden cache behind a bookshelf and down a secret passageway. The roughly 75 artifacts included boxes, daggers and other objects bearing swastikas and depictions of Hitler, as well as devices intended to measure physical characteristics such as head shape.

Nazism was based on the ideology that people designated as having Aryan traits were superior to other races. In the 1940s, millions of Jews were murdered by the state in Hitler’s Nazi Germany, a genocide known as the Holocaust, along with others denoted as inferior.

After the fall of the Third Reich at the end of World War Two, a number of high-ranking Nazi officials fled to South America.

They included notorious figures such as Adolf Eichmann, one of the architects of the Holocaust, who was captured by Israeli intelligence agents in Buenos Aires in 1960 and later executed. The infamous doctor Josef Mengele, who carried out genetic research on humans, also lived for some years in the city.

Authorities, who have not revealed the identity of the collector, said they were working with historians to trace the objects and identify how and when they likely entered Argentina.