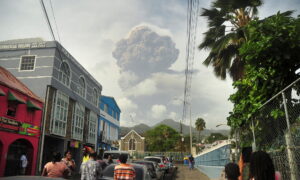 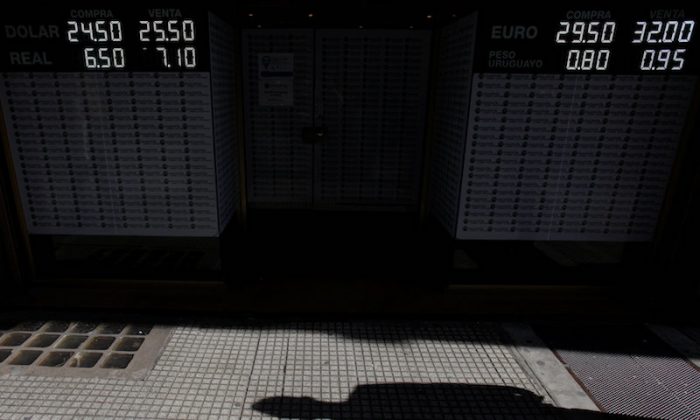 A pedestrian's shadow is cast next to an electronic board showing currency exchange rates in Buenos Aires' financial district, Argentina May 15, 2018. (REUTERS/Martin Acosta)
Americas

BUENOS AIRES—Argentina’s peso snapped its losing streak on Tuesday, closing 3.73 percent stronger at 24.10 per U.S. dollar after the central bank sold reserves but before the government reported 12-month inflation at a dizzying 25.5 percent.

The bank said it sold $791 million in the spot market to support the local currency on Tuesday. It has already sold billions of dollars of reserves on previous interventions and hiked interest rates to 40 percent.

Weak fundamentals, skittishness regarding devaluation and concern over Argentina’s drought-hit soy harvest have helped put the economy, and the peso, under pressure. Gross domestic product is nonetheless expected to expand modestly this year.

The currency hit a record low on Monday, having weakened every trading day since May 3. Despite Tuesday’s gain, the peso remained 14.77 percent weaker since the start of the month and 22.61 percent so far this year.

The central bank increased interest rates on its short-term ‘Lebac’ securities to 40 percent from 26.3 percent in its monthly auction, it said on Tuesday. The monetary authority sold 620,930 billion pesos ($25.77 billion) in Lebacs, compared with the 615,877 billion pesos’ worth of securities that matured.

Argentina will not issue any new international bonds for the rest of this year, and perhaps not in 2019 either, Finance Minister Luis Caputo told reporters on Tuesday.

The wobbly currency last week drove the government to ask for a “high access stand-by arrangement” from the International Monetary Fund. The deal, which may impose fiscal belt-tightening conditions, is being negotiated in Washington.

The IMF negotiations carry political risks for President Mauricio Macri, in a country where many blame IMF-backed policies for a 2001-2002 economic meltdown.

Macri’s Cabinet Chief Marcos Pena told reporters on Tuesday that Argentina, and not the IMF, would dictate the terms of any agreement. He called on the country to work to lower Argentina’s deficit, particularly in the 2019 budget.

“We will have to sit down, all parties, with enormous openness, generosity and responsibility,” to hammer out a spending plan for next year, Pena said.

The government earlier this month lowered its fiscal deficit goal in 2018 to 2.7 percent of gross domestic product from 3.2 percent previously, in another bid to calm markets.

By Jorge Otaola and Walter Bianchi