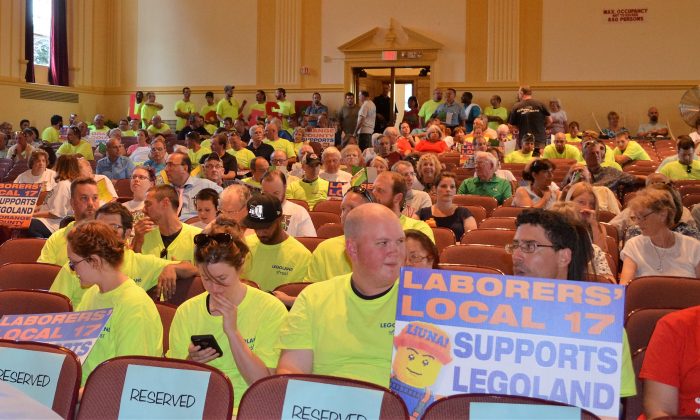 Area Residents Have Their Say at Legoland Public Hearings

The next day, the Orange County Industrial Development Agency (IDA) held a public hearing for people to air their concerns about financial incentives proposed for the Legoland project, an amusement park slated to be built on 523 acres in the Town of Goshen.

A large contingent of union members wearing florescent green T-shirts brought a truck to the Planning Board scoping session with digital screens on the sides and back with messages of support for the project.

In the hot school auditorium, Planning Board Chair Lee Bergus frequently asked the crowd of between 700 and 850 to not interrupt speakers so they could be heard over the whirring fans. Between 80 and 100 people stood up to speak on the project.

The scoping session could only address the environmental impacts of the project, Bergus said. He told the crowd that it would define the extent of the project’s design, “whatever it may be” and would be the framework for the Draft Environmental Impact Statement (DEIS). Any concerns raised at the scoping session would have to be addressed in the DEIS.

The comments could also address changes to the comprehensive plan and the town’s local law number six that would create a commercial recreation overlay zoning district for the proposed site, Bergus said.

He clarified that the “SEQR” process is not “secret,” as some residents had thought, confusing the two words that sound like homophones. “These aren’t ‘secret’ meetings,” Bergus said. “They are ‘SEQR’ meetings.”

Most speakers expressed concerns about traffic around the site, and transparency throughout the whole process.

Christina Ferraro told the board that transparency is a big issue for her, as well as traffic. She asked if the town will have the transportation infrastructure, especially more municipal parking, to absorb any increase in vehicles.

Bob Wolfson said he was worried about air pollution from the increase in traffic.

Christopher Dowdell, a former vice president of the Goshen School Board, asked the Goshen Planning Board to put the issue to a referendum.

Jeannie Ryan was concerned with public safety and congestion that might obstruct handling emergencies. She wants the board to schedule mock drills, specifically at 6 p.m. on Sunday.

William Hecht, an Orange-Ulster BOCES district superintendent, asked the board to consider the day and times that construction would take place for road improvements so it would not interfere with transporting students to the school.

Kurtis Kotes, an assistant superintendent in the Goshen Central School District and Arthur Conklin, assistant director of transportation for the district, asked the board to consider how people driving into the park would affect the buses coming to the BOCES satellite school on Harriman Drive, the same road that LEGOLAND is proposing to build its service entrance on.

Goshen resident Patrick Cuddy said traffic around the area “will absolutely be a nightmare,” citing the state Department of Transportation’s inclusion of five areas between Monroe and Goshen as high accident sites.

The traffic issue for Jane Bogart-Schmidt was about bicycles and pedestrians. She asked the Board to consider the effect on pedestrian and bicycle traffic, especially near the Heritage Trail, which crosses main roads near the proposed park site.

Michael Sussman, an attorney whose office is in the Village of Goshen, objected to the proposed zoning changes for the LEGOLAND site. “If it’s just zoning for LEGOLAND, it’s spot zoning,” he said, “which is illegal.”

We run the risk of becoming a total bedroom community, which is unsustainable.
— Susan Fast, Goshen Resident

There were also people who spoke for the project.

Dr. John Zahradnik said he was a supporter after he contacted an acquaintance in Carlsbad, California, the site of another LEGOLAND, and heard nothing but good things about it. “It hasn’t hurt the community. There are no adverse effects from the lights or from the sound, and it’s been a blessing for the community,” he said.

Susan Fast said she supports LEGOLAND because “we run the risk of becoming a total bedroom community which, is unsustainable.”

“If we stop business without giving them a fair hearing, we create an unsustainable tax burden,” she said.

James Petro, the Orange County Industrial Development Agency’s (IDA) executive director, chaired the public hearing and asked speakers to limit their comments to the financial aspects of the project, particularly the 30-year PILOT (Payment In Lieu Of Taxes) and how this would affect taxes for local residents.

Corr asked who would pay the rollback taxes if there was an agricultural assessment on the site. Rollback taxes are collected when a property is converted from a use that has tax exemptions, such as agricultural, to one that does not.

Maureen Halahan, president and CEO of the Orange County Partnership, said it would have a profound economic impact on the area, and pointed to the state awarding Legoland $1 million last year.

“Our [Regional Economic Development] Council decided they were such a part of our overall strategy to bring in new jobs, new business, and a tourism destination that they will create a multiplier that is sometimes incalculable,” she said, referring to the council that nominates projects to be considered for some state grants.

I hear it all the time, ‘I can’t believe that it landed in Orange County.’
— Maureen Halahan, CEO and President, Orange County Partnership

She said Orange County is the envy of surrounding counties. “I hear it all the time, ‘I can’t believe that it landed in Orange County.'”

Other speakers echoed that sentiment.

President of the Orange County Chamber of Commerce and a Goshen resident, Lynn Cione, spoke of the town’s tax situation, which is currently 52 percent off the tax rolls. “We are the seat of county government,” she said. “We have all sorts of things that are off the tax rolls that we need.”

Town Supervisor Doug Bloomfield gave a dour fiscal assessment of Goshen today. “Financially we are not in the best shape. We have 20 percent fewer people today than we had 10 years ago. [Between April 2015 and April 2016] we’ve had a 120 percent increase in foreclosures in the community of Goshen,” he said.

Bill Fioravanti, the director of business attraction for the Orange County Partnership, told the IDA that the park would pay about $14 million annually, including PILOT payments, the host town agreement, sales taxes, and a bed tax for the proposed 250-room hotel on the site.

“The spill-off, the multiplier effect of money staying here locally—it will help our gas stations, our restaurants, and our farms, and our nonprofits,” he said.

Robert Miller, assistant superintendent for business of the Goshen Central School District, asked the agency to approve a PILOT for less than 30 years.

Chairman of the New Windsor Planning Board, Genaro Argenio, said a project of this size needs a PILOT. “This project is so unique. It’s not an asphalt plant, it’s not a concrete plant. It’s not a warehouse. It’s not a single hotel with 370 beds.”

John Stein, a Village of Goshen resident, asked for a guarantee that his taxes will not go up once the park is up and running.

Other speakers gave general comments about the financial impact of the proposed theme park. Vince Ferry was concerned that the IDA would bear a financial liability in the event of a disaster, such as the flooding in 2011.

Judy Neery did some personal research by calling a real estate agent in Carlsbad, California, where there is a Legoland already built. The agent’s comments changed Neery’s opinion. “She made me feel relieved,” Neery said.

The agent said Carlsbad had been struggling economically, and people were at first apprehensive about the park coming in.

“Once it was built she said it has revitalized their town and the whole region,” Neery said. Now the town is seen as a destination place. Tourists visit the local strawberry and flower fields, and visit petting zoos at local farms. The agent told Neery the park is one of the best places in town to work.

Bloomfield said he is for Legoland but warned that “if they cannot get through the planning process adequately, then they shouldn’t be here.”