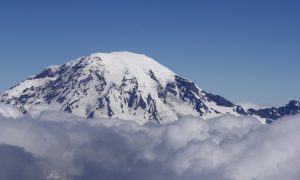 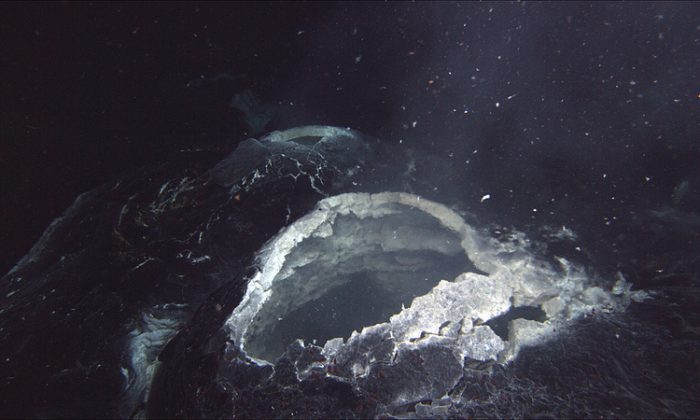 A photo fro 2012 showing a vent on Axial Seamount, an active volcano about 300 miles off the Oregon coast. (Bill Chadwick/Oregon State University)
Science

Thousands of Earthquakes Could Signal an Erupting Volcano Off Oregon Coast

Scientists believe an underwater volcano may be erupting off the Oregon coast after a string of thousands of small earthquakes started occurring last Friday.

The quakes were registered in the region Axial Seamont, a volcano about 300 miles out to sea from Cannon Beach, Oregon. Researchers say the quakes are a sign that magma is moving to the surface. They’ve also observed that the seafloor has dropped by nearly 8 feet—another sign that something may be going on.

Two geologists, Bill Chadwick of Oregon State University and Scott Nooner of the University of North Carolina Wilmington, predicted last September that Axial would erupt and now believe they are right. However, they won’t be able to confirm what’s happening until they get out there to see first hand.

“It isn’t clear yet whether the earthquakes and deflation at Axial are related to a full-blown eruption, or if it is only a large intrusion of magma that hasn’t quite reached the surface,” said Chadwick, in a press release from Oregon State. “There are some hints that lava did erupt, but we may not know for sure until we can get out there with a ship.”

Axial Seamount is the most active submarine volcano in the region and is the site of the world’s first underwater volcano observatory.

Although Chadwick and Nooner had “predicted” the eruption, they were just testing a hypothesis and had no idea if it would really happen.

“I have to say, I was having doubts about the forecast even the night before the activity started,” said Chadwick. “We didn’t have any real certainty that it would take place–it was more of a way to test our hypothesis that the pattern we have seen was repeatable and predictable.”

The researchers say that the underwater seismic activity poses no threat to humans and cannot cause a tsunami.